At UN, a French push to defend Iran deal

TEHRAN, September 19 - France has undertaken a robust push at the ongoing United Nations General Assembly (UNGA) meeting to make a case for why the United States should stay in a landmark, multilateral nuclear deal with Iran. 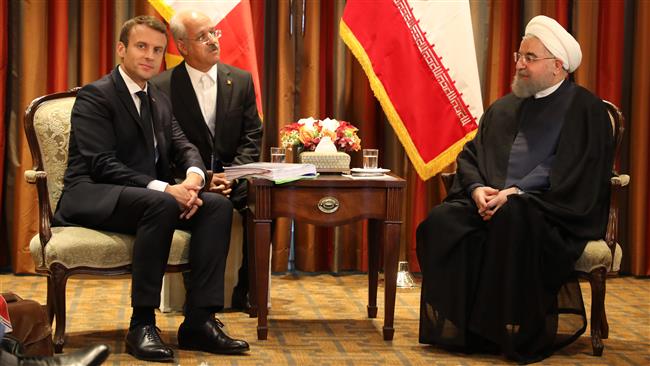 TEHRAN, Young Journalists Club (YJC) - French President Emmanuel Macron, who is making his maiden speech at the UNGA on Tuesday, said on Monday that Paris was committed to and supported the nuclear accord, known as the Joint Comprehensive Plan of Action (JCPOA).

Macron made the remark in a meeting with Iranian President Hassan Rouhani on the sidelines of the 72nd session of the UNGA in New York, where world leaders have gathered.

The French president called for the full implementation of the JCPOA, adding that any renegotiation of the agreement would be “meaningless.”

But since rising to the presidency in the US a year after the implementation of the Iran deal had begun, Donald Trump has been actively seeking a pretext to initiate an American withdrawal. All the other parties to the deal have in contrast stressed that the agreement must be sustained.

During the meeting with Macron, Rouhani said that the Trump administration’s behavior toward the JCPOA was “worrisome” for the international community.

“The JCPOA conveyed this message that complicated international issues could be resolved through dialog and in a win-win framework, and any damage to it could transmit this dangerous message to the world that diplomacy cannot settle problems,” the Iranian president said.

Macron has said previously that France saw no alternative to the JCPOA.

Earlier on Monday, French Foreign Minister Jean-Yves Le Drian had said that Paris would use meetings at the UN this week to persuade the US not to abandon the multilateral nuclear agreement with Iran.

“It’s essential to maintain (the deal) to prevent a spiral of proliferation” in the region, Le Drian warned ahead of a meeting between Trump and Macron.

“France will try to persuade President Trump of the importance of this choice,” he said, adding, however, that “work” may be necessary about the Iranian nuclear program after 2025, when Western countries believe certain provisions of the JCPOA will expire.

The International Atomic Energy Agency (IAEA) has repeatedly verified Iran’s adherence to the terms of the JCPOA. Nevertheless, Trump has called the agreement “the worst deal ever” and threatened that he would not certify Iranian compliance at a future deadline under American law in mid-October.

This is while the IAEA and a Joint Commission are the sole official parties in charge of monitoring Iranian compliance.

Share to
Related News
No one can undo benefits of Iran deal: President Rouhani
Iran ‘needs no permission to boost its defense might’
Tags
Iran ، JCPOA ، France ، UNGA ، Macron
Your Comment