TEHRAN, September 19 - Iran is identifying resources abroad to ensure stable supplies of agricultural products for a rapidly urbanizing population in the face of the constraints of worsening land and water resources. 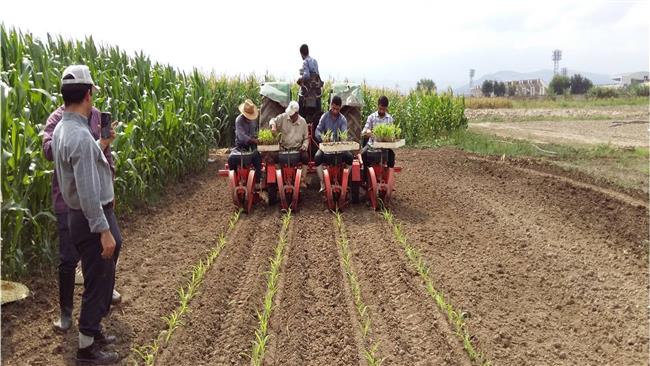 TEHRAN, Young Journalists Club (YJC) - The semi-arid state has been investing in large areas of farmland overseas, where contracts for cultivation on nearly 800,000 to one million hectares in a number of countries have been signed and approved by the government, according to Agriculture Minister Mahmoud Hojjati.

“Due to the paucity of water resources, the government is seriously pursuing an overseas farming plan for some commodities, including grain corn and oilseeds,” the minister has said.

Kazakhstan, Ukraine, Brazil and Ghana have been cited in the media among the places which Iran was pushing for long-term leasing or ownership of farmlands with higher agribusiness potentials.

On Saturday, Brazil’s deputy Minister of Agriculture, Livestock, and Food Supply Aomar Roberto Novak told IRNA that Iranian farming was possible in his country and that companies from the two sides had to negotiate and reach a conclusion.

Across the border, Azerbaijan is the latest country where Iran has been carrying out agricultural projects in more temperate climates.

There are now plans for this year to carry out the project on a larger scale in partnership with Azerbaijani companies, he said.

Under the contract, the Azerbaijani side will provide land and supply water and the Iranian companies will contribute technical knowledge and management.

“We are following two goals: bringing in foreign exchange to the country through supply of products to the Azerbaijani market and producing certain commodities for domestic use such as barley and alfalfa,” Motaharnejad told IRNA.

His company is also pursuing agricultural projects in Ukraine which has plenty of water and very fertile land, “but we need the support of the government of the Islamic Republic of Iran,” he added.

Iran relies on imports for 90% of its requirements for water-intensive products such as wheat and oilseeds. Other water-guzzling crops such as watermelons have a steady army of critics in a country where aquifers are critically overdrafted.

On Monday, Tasnim cited state statistics indicating that Iran had exported 500,000 tonnes of watermelons, worth $100 million, in the five months since March.

Iraq, the UAE, Turkey, Kuwait, Afghanistan, Qatar and Oman were the biggest receivers of Iran’s watermelon shipments, a summertime staple to quench thirst in sizzling temperatures.

For years, Iran has been trying to modernize its farm sector and rebalance output toward dry farming and value-added crops which are increasing in demand among its population of over 80 million.

Current farming methods include open-land agriculture and green-house production but more modern practices such as hydroponics, a soil-less culture technology which uses less water and land, have yet to be introduced, Presstv reported.

Iran exported its first consignment of wheat after many years this year, with state officials cheering it as a sign that the country’s plans to attain self-sufficiency in production of the strategic staple had materialized.

Results from state purchases from Iranian wheat growers so far this year are also robust, and buys of 8.8 million tonnes have already been secured, according to officials.

Food security is a key policy area for global state planners, and for Iran, it is additionally crucial in the face of a protracted drought where falling water tables are adversely affecting harvests and the basket of agricultural products is narrowing.

Food prices were a key driver of Iran’s double-digit inflation which shot over 40% under former president Mahmoud Ahmadinejad.