TEHRAN, September 19 - Amid rising tensions on the Korean Peninsula, world leaders and senior officials keep up their diplomatic efforts to resolve the crisis over North Korea’s military program. 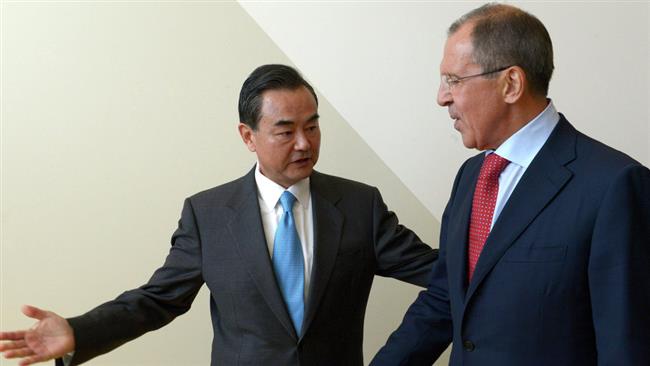 The two sides said the crisis must be resolved peacefully, insisting that the “current vicious cycle must be broken,” the Chinese Foreign Ministry announced in a Tuesday statement.

Tensions have been on the rise since Pyongyang conducted its sixth and most powerful nuclear test on September 3 and staged an intermediate-range missile test over Japan last Friday.

The North and the US, a close Seoul ally, have in recent weeks exchanged a barrage of military threats, giving rise to international concerns over a possible outbreak of war in the region.

Also on the sidelines of the UN meeting on Monday, Lavrov held talks with Japan’s Foreign Minister Taro Kono focusing on the North Korea crisis, underling the need to settle the issue through further dialog and diplomacy.

“We consider constant dialogue between Russia and Japan on the issues related to security in South East Asia as very much necessary, especially, in the light of that critical situation on the Korean Peninsula today,” said the Russian foreign minister.

Meanwhile, US President Donald Trump discussed the escalating Korean crisis with his Chinese counterpart Xi Jinping in a telephone conversation during which they expressed commitment to exerting further pressure on Pyongyang over its ballistic missile and nuclear programs, the White House announced in a Monday statement.

“The two leaders committed to maximizing pressure on North Korea through vigorous enforcement of United Nations Security Council resolutions,” said the statement, adding that the two also discussed “North Korea’s continued defiance of the international community and its efforts to destabilize Northeast Asia.”

The diplomatic exchanges at the UN come as the US president has not ruled out a military option against Pyongyang.

On Monday, the US military flew four F-35B stealth fighter jets and two B-1B bombers over the Korean Peninsula in a joint bombing drill with the South. Washington also carried out a war game with Japan on the same day.

The North wants its southern neighbor to end its military drills with the US, saying such joint exercises are rehearsals for a war.

US has “many military options” against Pyongyang

Repeating the threats, US Defense Secretary Jim Mattis also said on Monday that Washington has “many military options” against North Korea, including some that do not put Seoul at risk.

“There are many military options, in concert with our allies, that we will take to defend our allies and our own interests,” Mattis said in a press briefing at the Pentagon without elaborating.

The remarks came a day after Washington ramped up pressure on the North, warning that Pyongyang will be “destroyed” if it refuses to end its "reckless" nuclear and ballistic missile drive.

Mattis also confirmed that the US and Seoul had discussed the option of sending limited-size “tactical” nuclear weapons to South Korea.

Meanwhile, Tokyo announced on Tuesday that it will deploy an additional missile defense system on its northern island of Hokkaido, just days after Pyongyang launched a missile over the island.

“We are deploying a PAC-3 system at about noon” to a military base in the southern tip of Hokkaido, said Defense Ministry spokesman Kensaku Mizuseki.

According to local authorities, Japan has already set up the Patriot Advanced Capability-3 missile defense system in another part of Hokkaido.

Pyongyang has reportedly vowed to “sink” Japan into the sea. It said on Saturday that it sought military “equilibrium” with the US by developing a full nuclear arsenal.

For his part, hawkish Japanese Prime Minister Shinzo Abe has emphasized that he would “never tolerate” the North’s “dangerous provocative action” and has called on the international community to ramp up pressure on Pyongyang.