Curfew imposed in Iraq’s Kirkuk after clashes over Kurdistan vote

TEHRAN, September 19 - Iraqi police have imposed a curfew in the northern city of Kirkuk, which witnessed skirmishes between Kurds and Turkmen days before a controversial Kurdish referendum on independence from the mainland. 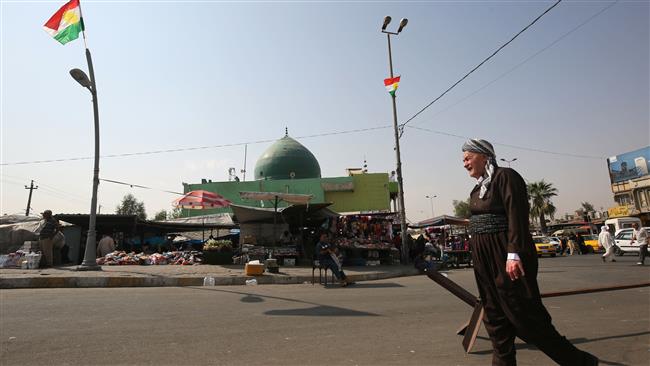 TEHRAN, Young Journalists Club (YJC) - The Iraqi Kurds plan to hold the plebiscite on September 25 in three provinces that make up their region, as well as in disputed areas that are controlled by Kurdish forces but claimed by Baghdad, including the oil-rich Kirkuk Province.

Baghdad has slammed the upcoming vote as unconstitutional, calling on the Kurdish leadership to drop the plan.

On Monday, Iraq’s top court temporarily suspended the Kurdish independence referendum, saying it “issued a national order to suspend the referendum procedures ... until the resolution of the cases regarding the constitutionality of said decision.” Iraqi Prime Minister Haider al-Abadi also formally asked the Kurdish officials to halt the process.

Later in the day, gunmen opened fire on one of the Kirkuk offices of the Iraqi Turkmen Front political movement, which is opposed to the Kurdish vote.

Mohammed Samaan Kanaan, in charge of the Front’s offices, told The Associated Press that guards returned fire, killing one and wounding two of the assailants.

Hours later, a police patrol attacked another office of the Iraqi Turkmen Front, but there were no casualties, he added.

Afterwards, Kirkuk was placed under a nighttime curfew, with provincial police chief, Brigadier General Khattab Omar saying that an investigation committee was probing the incident.

He blamed Monday’s clashes on “reckless enthusiastic youths” and said that arrests have been made.

Locals said Iraqi police had deployed overnight in Kirkuk to prevent any outbreak of ethnic violence ahead the Kurdish vote.

Last week, Iraqi Kurdish lawmakers approved holding the secession vote in the face of fierce opposition from the central government in Baghdad.

The United Nations and the US as well as regional powers like Iran and Turkey have also expressed concerns about the planned referendum by the semi-autonomous Kurdish Regional Government (KRG), arguing that it could create further instability in the already volatile region.

The president of Iraq’s Kurdistan region, Massoud Barzani, said once again late Monday that he would proceed with the referendum despite warnings at home and abroad.