Trump calls Iran nuclear deal an 'embarrassment' to US

TEHRAN, September 19 - US President Donald Trump has told the United Nations General Assembly that the internationally-negotiated nuclear agreement with Iran is an “embarrassment” to the United States, raising question whether he intends to stay in the 2015 accord. 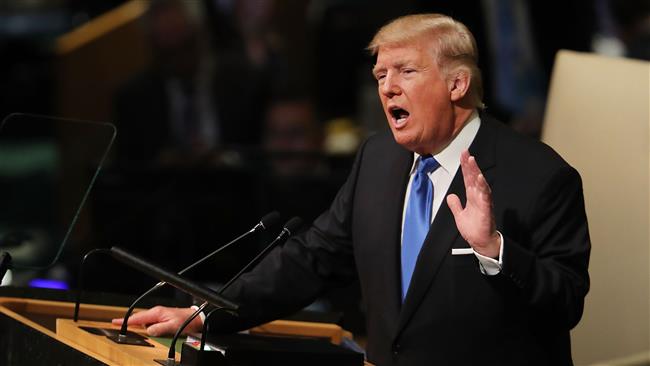 TEHRAN, Young Journalists Club (YJC) - Trump made his maiden speech before the 72nd session of the UN General Assembly on Tuesday, addressing issues such as terrorism, North Korea’s nuclear program and the Iran deal.

The Republican president described the Iran nuclear agreement, known as the Joint Comprehensive Plan of Action, as “the worst and most one-sided transaction the US has ever entered into,” a characterization he often used during his presidential campaign.

“I don’t think you’ve heard the last of it, believe me,” Trump said.

The Trump administration has desperately sought a pretext to scrap or weaken the 2015 deal and get rid of the limits the deal imposes on the US ability to pursue more hostile policies against Iran.

However, Washington’s European allies seek to prevent the collapse of the deal and are stepping up efforts to convince Trump not to abandon the accord.

Federica Mogherini, the EU foreign policy chief, said on Monday that the Iran deal belonged to the entire world, not just the United States.

“I have said many times that the agreement is working fine, [and] the IAEA (International Atomic Energy Agency) [has] confirmed several times that Iran is fulfilling its obligations,” Mogherini said on Monday.

The White House faces an imminent decision on whether to certify that Iran is in compliance with the terms of the nuclear accord.

In his address, Trump also accused the Iranian government of exporting “violence, bloodshed and chaos.”

"Iran must stop supporting terrorists, begin serving its own people and respect the sovereign rights of its neighbors."

Trump also warned that he would “totally destroy” North Korea if the country threatened the United States or its allies.

"The United States has great strength and patience, but if it is forced to defend itself or its allies, we will have no choice but to totally destroy North Korea," he said.

"It is time for North Korea to realize that its denuclearization is its only responsible future," he added.

Trump also warned that North Korean leader Kim Jong-un, whom he referred to as "rocket man", "is on a suicide mission for himself."

The strong words came after Trump made the case that North Korea is a "country that imperils the world,” adding that it is in no country's interest that Pyongyang continues with its nuclear and missile programs.

Trump also praised the United Nations for imposing economic sanctions on Pyongyang over its recent nuclear and ballistic missile tests.

Trump called on the international community to further isolate North Korea in light of its "reckless pursuit" of nuclear weapons.

"It is an outrage that some nations would not only trade with such a nation but would arm, supply and financially support a country that imperils the world."

The US president also addressed the issue of terrorism, saying the world faced a “great peril” from terrorists with expanding reach across the globe and “rogue regimes” that supported them.

“We meet at a time of immense promise and great peril,” Trump said. “It is up to us whether we will lift the world to new heights or let it fall into a valley of disrepair.”

Trump, who has criticized the UN in the past as weak and incompetent, said, "The powerful people in this room, under the guidance and auspices of the United Nations can solve many of these vicious and complex problems.”

The president indicated that the United States was prepared to combat global instability through military force. "Our military will soon be the strongest it's ever been," he said.

Trump opened his remarks touting his economic achievements as president, a nod to his core campaign promises of prosperity at home.

"The United States has done very well since Election Day last November 8," he said. "The stock market is at an all-time high, a record. Unemployment is at its lowest level."

Trump brought his “America-First” agenda to the UN, saying he would place America’s interests above those of all other countries.

"As President of the United States, I will always put America first," he said. "All responsible leaders have an obligation to serve their own nations."