TEHRAN, September 20 - Billboards for an English-language school in Croatia have been taken down after US First Lady Melania Trump threatened to take legal action. 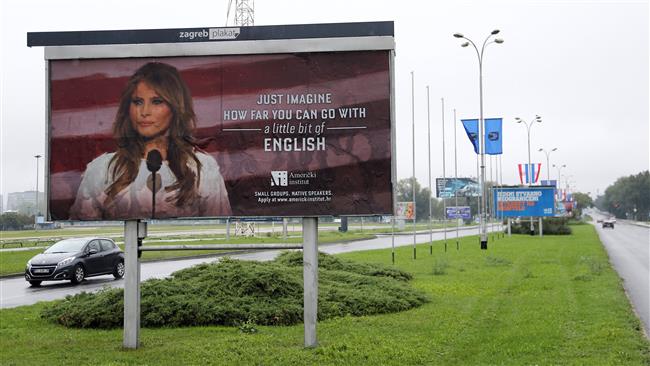 TEHRAN, Young Journalists Club (YJC) - Reports said billboards featuring Melania Trump in front of a microphone, reading, “Just imagine how far you can go with a little bit of English,” were removed in Croatia’s capital city of Zagreb on Tuesday after the first lady’s lawyer threatened to sue over using her poster without consent.

The Associated Press noted that the billboards were part of an English-language institute’s marketing campaign to persuade Croats to learn English using the example of Melania’s success.

“I’m satisfied with the fact that the school admitted that they violated the law and that they are ready to remove the billboards and (Facebook) ads,” said lawyer Natasa Pirc-Musar. “We are still analyzing possible further legal steps.”

The US first lady’s lawyer added that the Croatian school had apologized for the billboards, but the statement was not enough and also needed to be published by the Croatian and Slovenian state news agencies.

"We are very sorry that the billboards were misunderstood as something intended to mock the US first lady," Ivis Buric, a spokeswoman for the school, American Institute, said. "It was meant to be something positive, to show her as a role model."

Melania Trump was born in neighboring Slovenia as Melanija Knavs and left the country in her 20s to pursue an international modeling career in the US. She met Donald Trump at a fashion week party in New York in 1998.