TEHRAN, September 20 - President Hassan Rouhani dismissed US criticism of Iran’s missile plan, pledging that Tehran would strengthen its defense capabilities against the backdrop of regional and global threats. 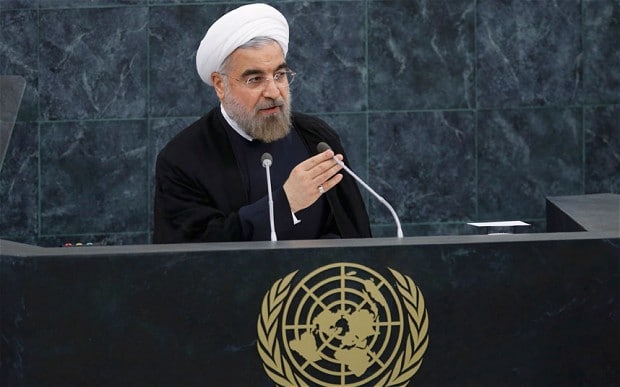 TEHRAN, Young Journalists Club (YJC) - “Our people cannot stand by idly in the face of regional threats. Iran’s missiles serve defense purposes,” he said in a meeting with US media representatives in New York.

Rouhani then added that no one can claim that “Iran should not protect itself or build its needed weapons whereas regional countries have state-of-the-art weapons.”

The Iranian nation keeps building “missiles and defensive weapons,” he said, adding “the government’s main responsibility is to protect the nation and national security.”

Rouhani also added Iran’s national defense program was being subjected to intensive debates amid a deafening silence over the weapons being used on a daily basis against innocent civilians in Yemen.

The Iranian president also referred to Iran’s 2015 nuclear deal with P5+1, regarded as the Joint Comprehensive Plan of Action (JCPOA), saying that the deal has resulted in “better communication between Iran, regional states, the European Union and other countries.”

Rouhani pointed to the accusations by US President Donald Trump’s administration that Iran does not abide by the JCPOA and said, “Under this agreement, the only observatory body is the International Atomic Energy Agency (IAEA), whose inspectors provide reports on a quarterly basis, and no other authority is entitled to talk about Iran’s compliance or noncompliance."

“All the seven reports of the IAEA have confirmed that Iran has been fully compliant with its obligations,” he emphasized.

“If the US administration breaches its commitments, it will be responsible for all the damage,” Rouhani warned.

In his speech before the 72nd session of the UN General Assembly on Tuesday, Trump called the internationally-negotiated nuclear agreement with Iran an “embarrassment” to the United States.

The White House faces an imminent decision on whether to certify Iran's compliance with the terms of the nuclear accord.

On the sidelines of the General Assembly session, Rouhani held separate meetings with world leaders to exchange views on issues of bilateral and global importance.

In one of the meetings, Rouhani sat down with new Pakistani Prime Minister Shahid Khaqan Abbasi to explore ways of promoting neighborly relations in all areas, especially in the energy sector.

“We are ready to provide energy for Pakistan and we welcome Pakistani investors in this area,” the Iranian president said.

Rouhani also raised concerns about terror attacks by Pakistani-based terror groups against Iranian soil, calling on Islamabad to identify those terrorists and prevent their anti-Iran moves.

Abbasi, for his part, called for promotion of bilateral ties in all areas. He also pledged to follow up on Iran’s border security concerns, noting that the Pakistani army has already been deployed at the border to ensure security there.

In a separate meeting with Norwegian Prime Minister Erna Solberg, Rouhani said there are ample opportunities for the promotion of Iran-Norway economic ties in the post-JCPOA era.

“Expansion of Tehran-Oslo banking ties will lay a solid foundation for accelerating the two countries’ economic relations,” he said.

Solberg, for her part, underlined the country’s commitment to Iran’s nuclear agreement, saying Iran and Norway can cooperate in many areas, as reports confirm that Iran has been abiding by its commitments under the JCPOA.

She pointed to her country’s resolve to make investment in Iran and noted that Oslo is trying to remove the obstacles to closer banking ties to that effect.

At another meeting with Belgian Prime Minister Charles Michel, Rouhani welcomed Belgian companies to invest in the Iranian market and underlined the need to provide more facilities for tourists from both countries.

Michel, fort his part, lauded the JCPOA as a great opportunity for the promotion of Iran-Belgium cooperation.

He also invited Rouhani to visit Belgium and described the visit as a “good sign” for the enhancement of Iran’s relations with the 27 EU member states.

Share to
Related News
Iran not to negotiate over its missile power, says MP
Iran ‘needs no permission to boost its defense might’
US most isolated country at UN over JCPOA: Iran president
Full text of Rouhani’s speech in New York
Rouhani calls Trump’s comments ‘ignorant, spiteful’
Rouhani says no one will trust US if Trump reneges nuclear deal
Iran unveils drone base, warning enemies
Commander: US has no right to decide about Iran's defense matters
Commander: Iran air defense system ready for use by March 2018
Iran says exports of military equipment on agenda
Tags
Iran ، weapons ، defense program
Your Comment