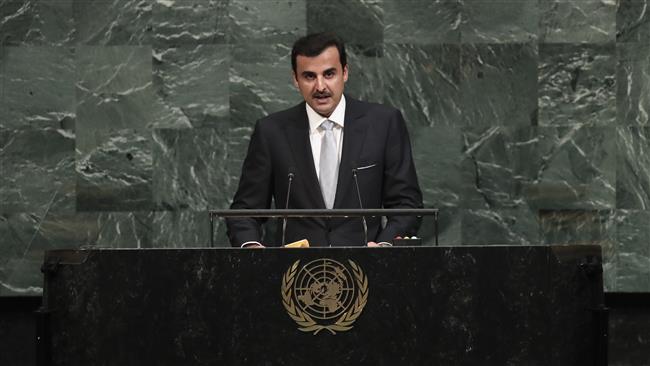 TEHRAN, Young Journalists Club (YJC) - “I stand before you while my country and my people are subjected to an ongoing and unjust blockade imposed since June 5 by neighboring countries,” Sheikh Tamim said in an address to the 72nd session of the United Nations General Assembly in New York on Tuesday.

In one of the worst diplomatic dispute to hit the Persian Gulf region in decades, Saudi Arabia, Egypt, Bahrain and the UAE cut diplomatic ties with Qatar and slapped an economic embargo on the country, accusing it of supporting terrorism.

Doha rejects the allegation and suggests it is being targeted because it has been following foreign policies that are more independent of the Riyadh regime.

The boycotting states have issued a list of demands for Qatar to meet in order for the dispute to be resolved, but Doha has refused to comply with them, slamming the demands as an attack on its sovereignty.

“The countries who imposed the blockade on the State of Qatar interfere in the internal affairs of many countries, and accuse all those who oppose them domestically and abroad with terrorism. By doing they are inflicting damage on the war on terror,” the Qatari emir said.

Sheikh Tamim highlighted Qatar’s resistance in the face of the Saudi-led bloc’s excessive demands and said Doha has “refused to yield to dictations by pressure and siege.”

The blockade was meant to put pressure on Qataris via “foodstuffs, medicine and ripping off consanguineous relations to force them change their political affiliation to destabilize a sovereign country,” he said in a 22-minute address. “Isn’t this one of the definitions of terrorism?” Sheikh Tamim asked.

The emir further called for “for an unconditional dialogue based on mutual respect for sovereignty” to end the diplomatic crisis gripping the Persian Gulf region.

Earlier this month, Saudi Arabia suspended any dialogue with Qatar, accusing it of “distorting facts,” shortly after a report of a phone conversation between the Qatari emir and Saudi Crown Prince Mohammad bin Salman suggested a breakthrough in the Persian Gulf dispute.

Following his Tuesday speech, Sheikh Tamim held a meeting with US President Donald Trump, where the latter said he had a “very strong feeling” the Qatar row would be solved "pretty quickly.”

With no end in sight for the crisis, a furious war of words erupted between diplomats from Qatar and its boycotters at an Arab League meeting in the Egyptian capital, Cairo, last week.

Qatar’s Minister of State for Foreign Affairs Soltan bin Saad al-Muraikhi took the podium at the event to denounce what he called a “vicious media campaign” against his country “waged by rabid dogs backed by some regimes.”

Muraikhi’s comments sparked angry reactions from the representatives of the Saudi-led bloc.