TEHRAN, September 21 - US President Donald Trump’s threats of military action against North Korea are “overblown” statement that would never come true, an American analyst says, arguing American military officials are well-aware how “devastating” such warfare would be. 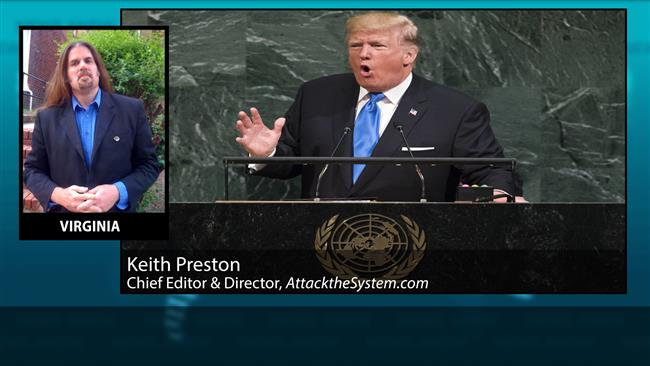 TEHRAN, Young Journalists Club (YJC) - Keith Preston, director of attackthesystem.org, made the remarks while discussing Trump’s debut speech at the United Nations General Assembly, where he said Tuesday that the US was ready to destroy the North to resolve the ongoing standoff over the country’s ballistic missile and nuclear weapons program.

“Trump is known for his blustering and overblown rhetoric,” Preston told Press TV on Wednesday. “Anything that Trump says along the lines of threatening to destroy North Korea has to be taken with a grain of salt.”

“This is a long-standing conflict between the United States and North Korea and the norm is that the countries like to talk tough against one another… but nothing ever comes of this,” the analyst argued.

Last month, when the standoff between North Korea and the US over Pyongyang’s ballistic missile and nuclear weapons programs reached its peak, Trump threatened North Korean leader Kim Jong-un with “fire and fury the world has never seen.”

The threats, however, have not went down well with traditional US allies like the UK, France and Germany who have all called for diplomatic solutions.

‘American people have other priorities’

Preston said American military action against North Korea under the Trump administration was “unlikely” because US military officials would oppose it and the Republican “tends to be very deferent to military opinion.”

“There is a wide range of areas in which Trump has shifted his own positions out of deference to the judgment of the military hierarchy and I don’t think that the American military establishment is fund of the idea” of a war with North Korea because it would be “devastating.”

Citing the “disastrous” US-led wars in Iraq and Afghanistan, Preston said a direct military confrontation with Pyongyang would be “even more disastrous.”

Another reason that made the war unlikely, according to Preston, was the fact that the American public was preoccupied with more important problems like the economy, immigration and healthcare and didn’t pay much attention to tensions with North Korea.