TEHRAN, September 21 - Hundreds of thousands of people have gathered in the Yemeni capital, Sana’a, to mark the third anniversary of the country’s September 21 Revolution and condemn the bloody Saudi war against the nation. 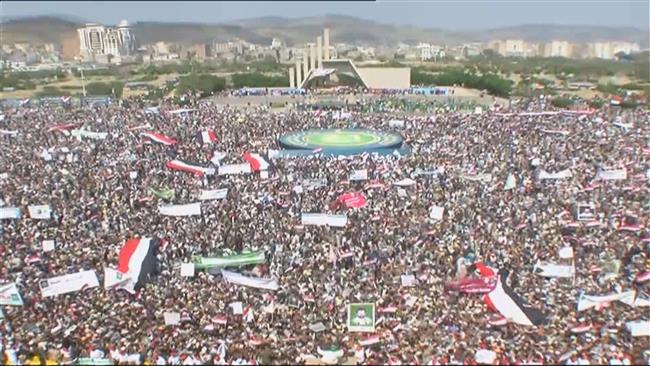 TEHRAN, Young Journalists Club (YJC) - The demonstrators in Thursday's mass rally reaffirmed their commitment to the government in Sana’a and the Yemeni forces defending the country against an ongoing Saudi war.

Large crowds from across the country have been flocking to Sana’a since Thursday morning to celebrate the occasion.

A convoy of UAE military forces captured by Yemeni forces during their operations was also displayed at the rally. The military equipment was being used by Saudi-led troops and pro-Riyadh militia fighting on the ground against the Yemeni army, which is backed by the Houthi Ansarullah fighters and popular groups.

In September 2014, the Ansarullah fighters took state matters in their hands in Sana’a amid the absence of an efficient government there.

Before gaining control of the capital, the Houthis had set a deadline for the political parties to put aside differences and fill the power vacuum, but the deadline was missed without any change in the impoverished country’s political scene.

However, the former Saudi-backed president, Abd Rabuh Mansur Hadi, later stepped down, refusing a call by the Houthi movement to reconsider the move.

Hadi then fled to Saudi Arabia, which launched a military campaign against Yemen along with a number of its allies in March 2015 to reinstall Hadi and crush the Houthi movement.

In a speech aired on al-Masirah TV on Wednesday on the anniversary of the revolution, leader of the Ansarullah movement Abdul-Malik al-Houthi slammed the Saudi-led war against the country.

He praised the existing diversity in Yemen’s social fabric and warned that the enemy, including the US, Israel and the Saudi-led coalition, seeks to use such differences to create divisions in the country and disintegrate Yemen.

More than 12,000 people have been killed since the onset of the Saudi military campaign more than two and a half years ago. Much of the Arabian Peninsula country’s infrastructure, including hospitals, schools and factories, has been reduced to rubble due to the war.