TEHRAN, September 21 - French President Emmanuel Macron has taken the podium at the UN to speak in defense of the 2015 multilateral nuclear deal with Iran, warning that a failure to honor the accord will be “irresponsible.” 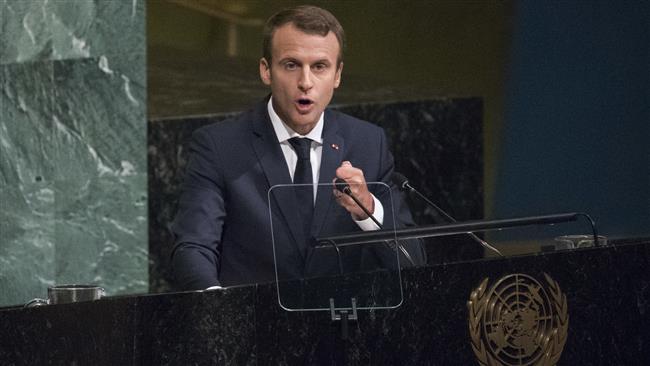 TEHRAN, Young Journalists Club (YJC) - “This is a good agreement, an agreement that’s essential to peace,” Macron said in his first address to the 72nd session of the UN General Assembly in New York on Tuesday.

He further described the deal, known as the Joint Comprehensive Plan of Action (JCPOA), as a “solid, robust agreement,” adding, “To reject it now without proposing anything else would be a grave error, and not respecting it would be irresponsible.”

Macron countered the remarks by US President Donald Trump earlier in the day, who once again expressed his hostility towards the JCPOA at the same podium.

“That President Trump thinks that this agreement is not perfect and doesn’t protect enough is an argument that I can hear, but I asked him what was his alternative proposal. I didn’t understand it,” Macron told reporters after his address.

Earlier in the day, European Union’s foreign policy chief, Federica Mogherini, also came to the defense of the deal, which she said belongs to the entire world, not just the United States.

During his UNGA speech, Trump, a stalwart opponent of the deal, described the JCPOA as “the worst and most one-sided transaction the US has ever entered into.”

Tel Aviv’s “policy regarding the nuclear deal with Iran is very simple - change it or cancel it, fix it or nix it,” he said.

Secretary of Iran’s Supreme National Security Council, Ali Shamkhani, denounced Trump’s hostile rhetoric against the JCPOA and said, “These remarks emanate from the US president’s poor understanding of international agreements and their legal principles, and are regarded as unimportant from the view of point of the international community.”

“None of the signatories to the JCPOA have the right to refrain from the accepted mechanisms in this international agreement using false and non-legal pretexts,” he said.

Shamkhani also slammed the US president’s anti-JCPOA stance as a “mockery of the path of dialog” and a “sign of this country’s non-compliance with the rules of democracy.”

The JCPOA was widely considered as a defeat for Israel’s lobbying attempts to prevent its signing and a landmark victory for international diplomacy.

During his election campaign, Trump had threatened to “tear up” the deal. Since rising to presidency in January, a year after the deal took effect, Trump has, however, adopted a milder tone, but has been actively looking for a pretext to launch a renegotiation of the deal or initiate an American withdrawal.

This is while the other parties to the deal, along with the entire international community, have thrown their weight behind the accord, praising the Islamic Republic for its full commitment to its side of the bargain.

Responding to Netanyahu’s rant, Hossein Maleki, Iran’s first counselor in the permanent mission of the Islamic Republic of Iran to the UN, said the Israeli premier merely tried to “deceive the public and cover up his horrendous policies and behavior.”

This is while “the very nature of this regime, which is based on occupation, aggression, crackdown, violence and terror, could never be concealed though leveling accusations against others,” the Iranian diplomat added.

“In the information age, their weapon of mass deception is no longer effective,” Maleki added, Presstv reported.

The Iranian diplomat further questioned the regime’s belligerent policies over the past decades, saying Netanyahu should have instead explained to the world body “why this regime, during its short lifetime, has invaded all its neighbors with no exception and waged over 15 wars, even on countries outside the region.”

Israel, which pursues a policy of deliberate ambiguity about its nuclear weapons, is estimated to have 200 to 400 nuclear warheads in its arsenal.

The regime has refused to allow inspections of its military nuclear facilities or sign the Non-Proliferation Treaty (NPT).