TEHRAN, September 21 - Foreign ministers of Iran and P5+1 countries as well as the EU Foreign Policy Chief Federica Mogherini met for the time in New York. 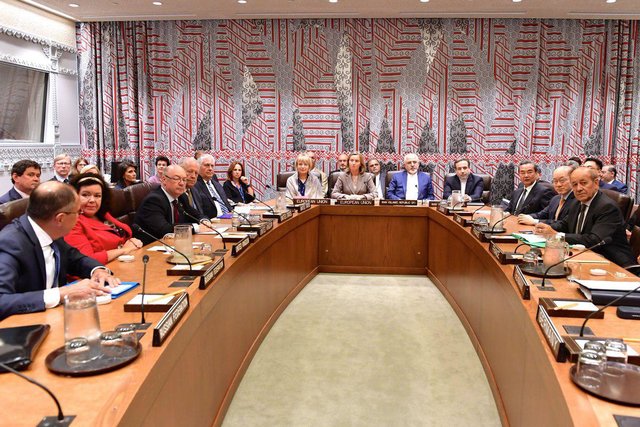 TEHRAN, Young Journalists Club (YJC) - This is the first time that Iranian Foreign Minister Mohammad-Javad Zarif and US Secretary of State Rex Tillerson are meeting over an international issue.

We raised the issue of Washington’s non-compliance with the Joint Comprehensive Plan of Action (JCPOA) during the Wednesday meeting, said Zarif.

All the representatives present at the meeting stressed “the necessity for the signatories to respect the JCPOA,” the Iranian foreign minister stated, adding that it was the second Joint Commission meeting of the JCPOA at the ministerial level on the sidelines of the UN General Assembly in New York.

Referring to the US president's speech at the UN General Assembly, the Iranian foreign minister said Trump's anti-Iran rhetoric proves that “the US is detached from the realities of the international community.”

Trump told the General Assembly on Tuesday that the nuclear agreement is an “embarrassment” for Washington, accusing Tehran of violating the deal.

US Secretary of State Rex Tillerson, for his part, said he had a “matter of fact” exchange with his Iranian counterpart, but he said that Washington still has "significant issues" with the nuclear deal.

"It was a good opportunity to meet, shake hands. The tone was very matter of fact.

There was no yelling, we didn't throw shoes at one another," Tillerson said.

"It was not an angry tone at all. It was a very, very matter of fact exchange about how we see this agreement very differently."

EU: No need to renegotiate the JCPOA

"There is no need to renegotiate parts of the agreement, because the agreement is concerning a nuclear program and as such is delivering," Mogherini told reporters at the United Nations on Wednesday.

"We all agreed that all sides are fulfilling their commitments," she said, adding that the EU would exert all efforts to make sure the JCPOA stays in place.

The other signatories to the agreement -- the UK, Russia, Germany, China and France -- have reiterated their commitment to the deal on multiple occasions.