US most isolated country at UN over JCPOA: Iran president

TEHRAN, September 21 - President Hassan Rouhani says the US was the most isolated country at the UN over its stance on Iran's nuclear accord, citing President Donald Trump’s attack on the agreement while other world leaders defended it. 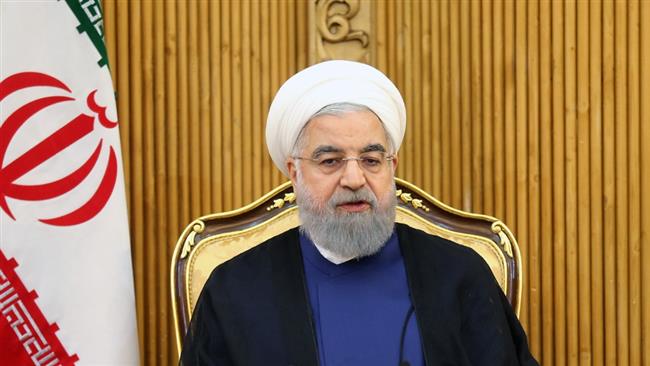 TEHRAN, Young Journalists Club (YJC) - Rouhani made the comments on Thursday upon his arrival in Tehran from New York, where he addressed the 72nd session of the UN General Assembly.

Trump “spoke against the JCPOA while all spoke in favor of the JCPOA at the UN," Rouhani said, referring to the Joint Comprehensive Plan of Action as the nuclear accord is officially called.

The US went against the tide and was “the most isolated country at the UN over the nuclear agreement, which has been certified by the UN,” he added.

During his speech at the UN General Assembly on Tuesday, Trump said the JCPOA was “an embarrassment to the United States” and “one of the worst and most one-sided transactions the United States has ever entered into.”

After Trump’s address, Rouhani said many reporters, officials and European heads of state said explicitly that they opposed the US president’s remarks.

Trump made major mistakes in his speech and leveled “baseless allegations that are beneath the dignity of the United Nations and the person who deems himself the president of a country,” Rouhani added.

In his meetings with European officials from France, Britain, Sweden, Belgium and Bulgaria, all stressed that the JCPOA was non-renegotiable and all sides had to implement it, the president also said.

“As regards the JCPOA issue, we will be firm and if a person disrupts it, all options will be before us,” he said.

During his address at the UN, Rouhani said that the Iranian nuclear deal was an international agreement backed by UN Security Council Resolution 2231, Presstv reported.

“By reneging on its promises and violating international obligations, the new US administration will only discredit itself globally and lose the trust of governments and nations in any future negotiations and commitments,” the Iranian president said.

The JCPOA was reached between Iran and six other countries — France, Russia, China, Britain, Germany, and the US — in July 2015 and took effect in January 2016.

Under the deal, Iran undertook to apply certain limits to its nuclear program in exchange for the termination of all nuclear-related sanctions against Tehran.

Since his presidency in January, a year after the deal took effect, Trump has been pushing for a renegotiation of the deal or US withdrawal from the agreement.