TEHRAN, September 22 - US Senator Bernie Sanders has denounced President Donald Trump’s handling of the Iran nuclear accord, warning that backing away from the agreement could hurt America's ability to strike deals in the future. 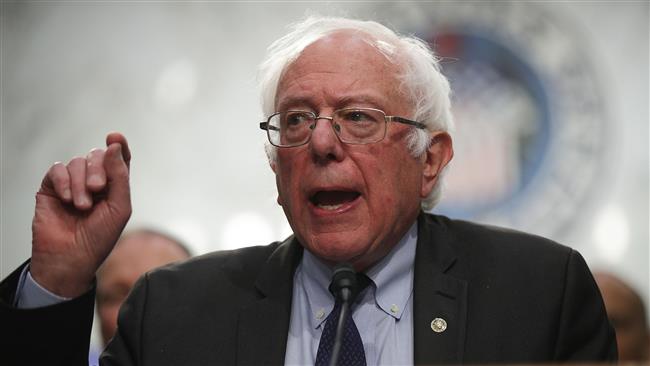 TEHRAN, Young Journalists Club (YJC) - During a foreign policy speech at Westminster College in Fulton, Missouri, on Thursday, Sanders asked why another country would want to make a deal with a "reckless president and an irresponsible Congress," if Washington pulls out from the 2015 nuclear agreement reached between Iran and six other countries, including the United States.

"I call on my colleagues in the Congress, and all Americans: We must protect this agreement. President Trump has signaled his intention to walk away from it, as he did the Paris agreement, regardless of the evidence that it is working. This would be a serious mistake," Sanders said.

The Vermont senator, who sought the Democratic Party’s nomination for president in 2016, praised the administration of former President Barack Obama for negotiating the Iran agreement, describing it as an example of "real leadership" and "real power."

The nuclear deal was reached between Iran and the P5+1 group of countries — the US, Russia, China, France, and Britain plus Germany — in July 2015 and took effect in January 2016.

Trump is nearing an October 15 deadline for certifying Iran's compliance with the deal, which puts limitations on its nuclear program in exchange for the removal of nuclear-related sanctions imposed against Tehran.

According to reports, Trump is likely to decertify the agreement, sending the issue to Congress. The US president would then call on Europe to agree to negotiate a tougher deal with Iran.

Sanders said the US should base its foreign policy on partnerships with other countries.

“Here is the bottom line: In my view the United States must seek partnerships not just between governments, but between peoples. A sensible and effective foreign policy recognizes that our safety and welfare is bound up with the safety and welfare of others around the world,” he said.

During his 2016 election campaign, Sanders often criticized his rival candidate, former US Secretary of State Hillary Clinton, for her support of the Iraq war.

On Thursday, he reiterated his criticism of the US-led Iraq invasion, calling it a "disastrous" conflict that brought "instability and destruction" to the region.

"Far too often, American intervention and the use of American military power has produced unintended consequences which have caused incalculable harm," he said.

Commenting on the so-called war against terrorism former US President George W. Bush launched after the September 11, 2001 attacks, Sanders said that the “war on terror has been a disaster for the American people and for American leadership."

“A heavy-handed military approach, with little transparency or accountability, doesn’t enhance our security. It makes the problem worse. ... One of the key misapprehensions of this mindset is the idea that military force is decisive in a way that diplomacy is not,” Presstv quoted him as saying.

‘Saudi Arabia is not an ally of the US’

Meanwhile, in an exclusive interview with The Intercept on Thursday, Sanders said Saudi Arabia is “not an ally of the United States.”

“I consider [Saudi Arabia] to be an undemocratic country that has supported terrorism around the world, it has funded terrorism. … They are not an ally of the United States.”

He accused the “incredibly anti-democratic” Saudis of “continuing to fund madrasas” and spreading “an extremely radical Wahhabi doctrine in many countries around the world.”
“They are fomenting a lot of hatred,” he added.

In May, Trump chose Saudi Arabia for his first foreign trip. He signed a $110 billion arms deal with the Saudis, with options to sell up to $350 billion over 10 years.

Saudi Arabia’s official radical ideology of Wahhabism, which is known for its lack of tolerance, shapes up the mindset of Daesh and other terrorist groups worldwide. Daesh has been ravaging Iraq since 2014.

On the other hand, the Saudi regime and some other Arab monarchies of the Persian Gulf region stand accused of funding and arming anti-Damascus militants, Daesh in particular, who have been engaged in deadly violence in Syria since 2011.