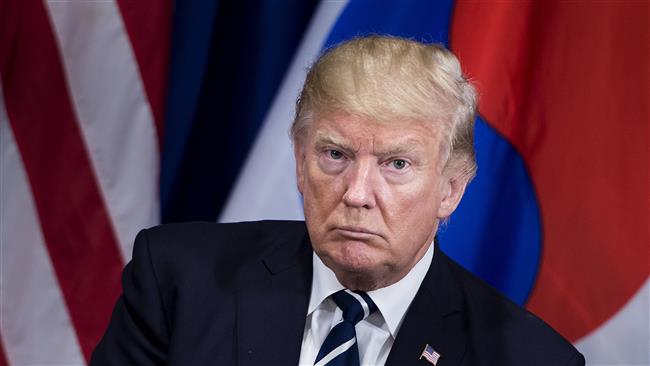 TEHRAN, Young Journalists Club (YJC) - Speaking at United Nations headquarters in New York City on Thursday, Trump said the order would increase the American ability to clamp down on individuals and companies that do business with North Korea.

Flanked at a table by Treasury Secretary Steven Mnuchin, Vice President Mike Pence, Secretary of State Rex Tillerson and US Ambassador to the UN Nikki Haley, Trump made the announcement before meeting with Japanese Prime Minister Shinzo Abe and South Korean President Moon Jae-in at a lunch.

US allies – Japan and South Korea -- have called for enforcing existing international sanctions as the best way to get Pyongyang to give up its nuclear weapons program.

Trump said he had authorized the Department of the Treasury to “target any individual or entity that conducts trade in goods, services or technology” with North Korea.

Trump said North Korea’s nuclear and ballistics programs “is a grave threat to peace and security in our world, and it is unacceptable that others financially support this criminal rogue regime.”

“The brutal North Korean regime does not respect its own citizens or the sovereignty of other nations. A new executive order will cut off sources of revenue that fund North Korea's efforts to develop the deadliest weapons known to human kind,” added the president of a country which has thousands of nuclear weapons and is the only state which actually used this weapon of mass destruction during the World War II.

Trump said that the sanctions only target North Korea, not the country’s largest trading partner, China. “I want to be clear the order targets only one country — that country is North Korea.”

He claimed that the Chinese had already told their central bank to “immediately stop doing business with North Korea.”

“I want to thank President Xi [Jinping] of China for the very bold move he made today,” Trump said. “It was a somewhat unexpected move, and we appreciate it.”

Trump warned North Korean leader Kim Jong-un in a speech to the UN General Assembly on Tuesday that the United States, if threatened, would “totally destroy” his country of 26 million people.

After Trump's threatening speech, South Korean President Moon struck a different tone, saying the crisis "needs to be managed stably so that tensions will not become overly intensified or accidental military clashes will not destroy peace."

President Moon has campaigned on the promise he would seek dialogue with neighboring North Korea and has sought to play down the possibility of taking a military action against the country.

On Thursday, he praised Trump’s announcement of imposing new sanctions on South Korea.

“President Trump just talked about the executive order, through which the US is going to be implementing sanctions against the DPRK,” Moon said.

“That was a very major announcement made by China to take actions on the DPRK. I am very confident that such moves will contribute to complete denuclearization of DPRK,” he added.

“We are going into the new stage of pressure from the viewpoint of exercising the stronger pressure, new pressures,” Abe said. “I welcome the new sanction measures of the United States.”

Tensions have risen in recent weeks over North Korea’s nuclear and ballistic missile tests, despite intense pressure from world powers. There is no sign, however, that international sanctions are having any effect on the actions of Pyongyang.

The United States has separately imposed unilateral sanctions, some of which target firms from China which is the primary economic partner of North Korea.

Last month, when the standoff between North Korea and the US over Pyongyang’s ballistic missile and nuclear weapons programs reached its peak, Trump threatened Kim with “fire and fury the world has never seen.”

Trump’s threats to "totally destroy" North Korea is counterproductive and justify Pyongyang's nuclear weapons and missile programs that it insists are for self-defense, according to analysts.

Experts say Trump's speech could have an opposite effect, intensifying the deteriorating situation in the Korean peninsula.

Any US attack would risk massive retaliation with a potentially catastrophic loss of life.
The US has 28,500 troops stationed in the South, a legacy of the 1950-53 Korean War which ended in a ceasefire rather than a peace treaty.