TEHRAN, September 22 - Lebanese President Michel Aoun has censured Israel’s repeated violations of his country’s sovereignty, accusing the Tel Aviv regime of seeking to achieve its goals by bullying other nations. 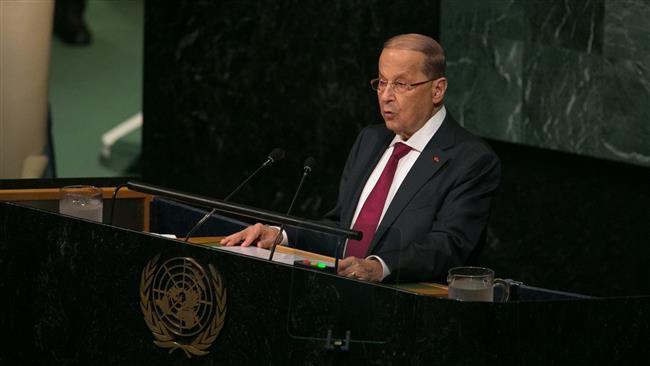 "Israel has always repeatedly violated Lebanese sovereignty," said the Lebanese head of state, referring to recent incidents, including an Israeli strike against the Syrian army’s positions launched from Lebanese airspace. "These violations are not new."

The Syrian army said in a statement on September 7 that one of its military positions near the town of Masyaf, located approximately 40 kilometers west of the provincial capital city of Hama, was hit by a number of missiles fired from Israeli warplanes flying over Lebanese airspace earlier in the day.

However, it only took the Israeli military another day to repeat the airspace violations.

On September 10, an Israeli aircraft breached Lebanese airspace over the southern city of Sidon, 40 kilometers (25 miles) south of the capital Beirut, causing sonic booms that broke windows and shook buildings.

Earlier this week, Aoun said during meetings with various delegations on the sidelines of the UNGA that Israel was still “lurking” on Lebanon’s border and the international community had failed to stop it.

“The Israeli enemy remains lurking. Israel keeps violating Lebanon’s sovereignty through daily breaches of its airspace and thus international resolutions. The international community has not been able to compel it to abide by the resolutions in force, not even by the international solutions that are put forward for the sake of peace in the region,” he said.

Lebanon's government, the Hezbollah resistance movement and the UN Interim Force in Lebanon (UNIFIL) have repeatedly condemned the overflights, saying they are in clear violation of UN Resolution 1701 and the country's sovereignty.

The resolution, which brokered a ceasefire in Israel’s 2006 war of aggression against Lebanon, calls on Tel Aviv to respect Beirut's sovereignty and territorial integrity.