TEHRAN, September 22 -Canada’s Prime Minister Justin Trudeau has expressed regret about the abusive treatment of the indigenous peoples of Canada throughout the country’s history, vowing to rectify the historical wrongs. 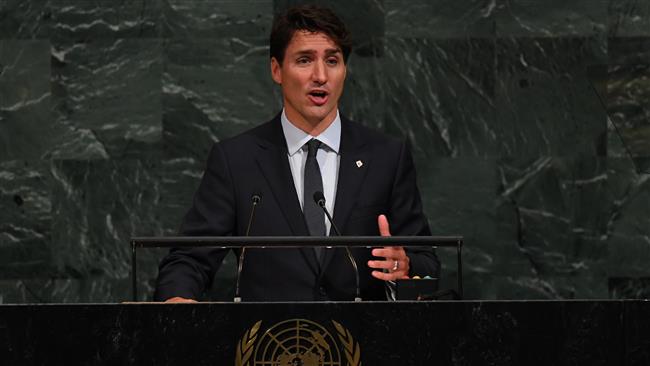 TEHRAN, Young Journalists Club (YJC) -“Canada is built on the ancestral land of indigenous peoples, but regrettably… for indigenous peoples in Canada, the experience was mostly one of humiliation, neglect, and abuse,” he said on Thursday before the United Nations General Assembly (UNGA).

He told the UNGA that his government would work to improve the lives of the First Nations peoples and achieve reconciliation.

“Canada is not a wonderland where the difficulties you know do not exist,” he said. “Canada remains a work in progress.”

“We have been working hard... to correct past injustices and bring about a better quality of life for indigenous peoples in Canada,” he said.

He expressed confidence that even though the path was “unchartered,” there would ultimately be “reconciliation.”

Indigenous people make up about four percent of the Canadian population and face higher levels of poverty and violence and shorter life expectancies. Many aboriginal communities do not have access to safe drinking water, and suicides have plagued several isolated communities.

A national inquiry into missing and murdered indigenous women has been hit by resignations and complaints that it is progressing too slowly.

Acknowledging Canada’s attempt to force assimilation through residential schooling and similar policies, Trudeau called the living conditions faced by aboriginals “the legacy of colonialism in Canada.”

He promised to move forward with a review of federal laws and policy, and to support indigenous self-determination.

Pamela Palmater, an indigenous lawyer and professor, said she would rather see action than a speech.

“Some of his words were exceptionally powerful (and) would give a lot of hope to a lot of people in Canada, but he falls down every time when it comes to substantive action,” Palmater said, referring to Trudeau.