Turkey to deploy troops inside Idlib as part of Astana deal: Erdogan

TEHRAN, September 22 - Turkish President Recep Tayyip Erdogan claims his country will deploy troops to Syria’s Idlib region as part of the Astana agreement with Iran and Russia on “de-escalation zones.” 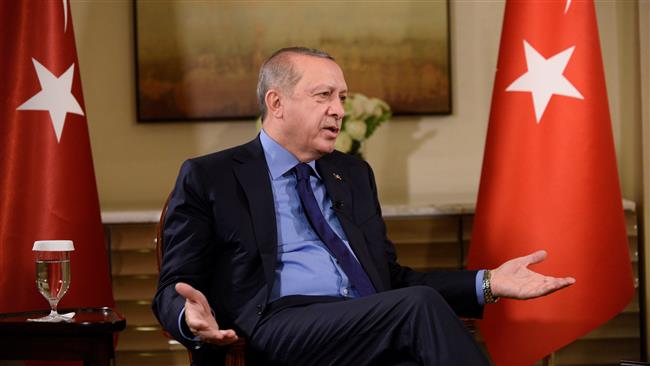 TEHRAN, Young Journalists Club (YJC) - Erdogan said in a Thursday interview with Reuters, “Under the agreement, Russians are maintaining security outside Idlib and Turkey will maintain the security inside Idlib region.”

Turkey, Russia and Iran act as guarantor states in the Syria peace process which has been underway between the Syrian government and the armed opposition in the Kazakh capital, Astana, since January.

In the latest round of the Astana talks last week, the three sides agreed on the details of a fourth de-escalation zone in Syria’s Idlib Province. In a joint statement, the trio said they had agreed “to allocate” their forces to patrol the zone covering Idlib and parts of the neighboring provinces of Latakia, Hama and Aleppo regions.

“The task is not easy ... With Putin we will discuss additional steps needed to be taken in order to eradicate terrorists once and for all to restore peace,” said the presidents, hinting of cooperation with the Russians in Turkey’s future policies towards Syria.

Erdogan said the “de-escalation” zones would be further discussed in talks with Russian President Vladimir Putin during his trip to Ankara next week.

The de-escalation zones are aimed at separating extremist groups, including Daesh and Jabhat al-Nusra from other militants.

The northwestern province of Idlib borders Turkey and is largely under the control of al-Nusra Front Takfiri militants.

Meanwhile, Erdogan said Turkey was considering counter-measures, including imposing sanctions, against the Kurdish region of northern Iraq over a planned September 25 referendum on the region’s secession from the mainland.

“Without any further delay we are going to discuss what kind of sanctions should be imposed and when the sanctions will be imposed,” Erdogan said without elaborating on the nature of the embargoes.

Turkish troops are also carrying out military exercises near the border with Iraq.

The Turkish head of state further said a cabinet meeting and a national security council session will be held on the planned Kurdish vote on Friday.

Erdogan said on Saturday the resolution on troop deployment abroad will be submitted to parliament for a vote.

The planned vote has drawn sharp criticisms from the central Baghdad government as well as the international community, particularly Iraq’s neighbors.

Turkey has been especially wary of a potential secession of the Kurdistan region from Iraq as it has been over the past decades grappling with pro-independence Kurdish militancy on its soil.