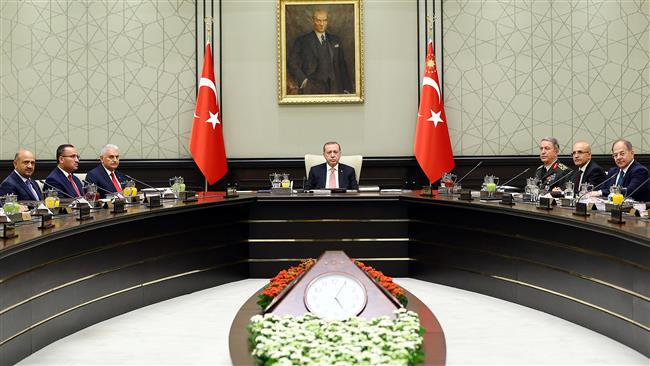 In a closing statement, the council said the KRG’s insistence on holding the vote on Monday despite warnings from Ankara, Baghdad, and the United Nations would have “terrible consequences” for the region.

“The illegitimacy of the referendum… and its being unacceptable were once again specified. It was strongly stressed that this step, which directly threatens Turkey’s national security, was a grave mistake that threatens Iraq’s political unity and territorial integrity as well as peace, security and stability of the region,” the statement read.
Turkey, which is home to the largest Kurdish population in the region, fears that the Kurdistan plebiscite would embolden the outlawed Kurdistan Workers’ Party (PKK) in its push for autonomy in Turkey’s southeastern areas.
Turkey reserves its sovereign rights under international accords should the Kurdish referendum go ahead, the statement added, signaling an extension of military presence in Iraq.

“Turkey reserves all options arising from bilateral and international agreements if the Kurdish regional referendum is held,” it said.

The statement also renewed Ankara’s call on the KRG to cancel the referendum “when there is still time” and expressed the Turkish government’s readiness to mediate between the KRG and the Iraqi central government to settle their disagreements “on a constitutional basis and through dialog.”

“The news conference will take place on Sunday, and the time and venue will be announced later,” Barzani’s office announced without elaborating.

‘All options on the table’

The National Security Council’s meeting was followed by a Turkish cabinet meeting that focused on countermeasures ahead of the Iraqi Kurdish vote.

Speaking after the cabinet meeting, Bekir Bozdag, the Turkish deputy prime minister and government spokesman, told reporters that “all options were on the table” as far as Ankara’s response to the referendum was concerned.

“It is not possible for us to accept the postponing of the referendum either. We demand a total cancellation, so that we won’t have to impose sanctions,” he said.

Earlier this week, Erdogan threatened to impose sanctions against the Iraqi Kurdistan over the independence vote.
Since September 18, the Turkish army has been conducting tank drills near the border with the Iraqi Kurdish region.