TEHRAN, September 23 - The Syrian foreign minister said the United States is enlisting the help of al-Nusra Front terrorist group to undermine the achievements of the intra-Syrian peace talks in the Kazakh capital, Astana. 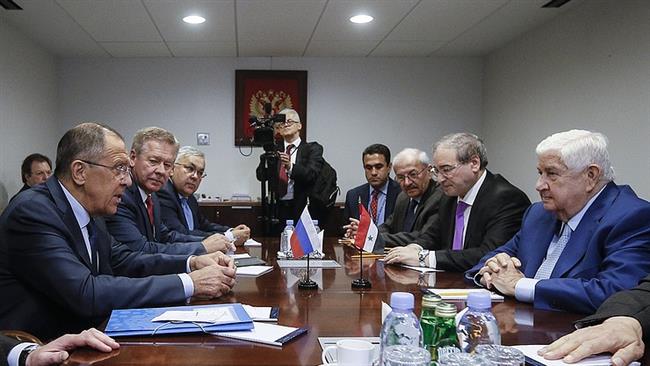 TEHRAN, Young Journalists Club (YJC) - Walid Muallem made the remark following a meeting with his Russian counterpart, Sergei Lavrov, on the sidelines of the 72nd session of the United Nations General Assembly (UNGA) in New York on Friday.

“They (the Americans) are dissatisfied with the successful outcome of the Astana peace process; that’s why they use their [assets], including Jabhat al-Nusra, to impede the agreements that had been negotiated,” Russia’s Tass news agency quoted Muallem as saying.

The Astana talks, mediated by Iran, Russia, and Turkey, have brought representatives from the Damascus government and opposition groups to the negotiating table in a bid to end the foreign-backed militancy in Syria, which broke out in March 2011. Six rounds of the negotiations have so far taken place — on January 23-24, February 15-16, March 14-15, May 3-4, July 4-5, and September 14-15.

The talks resulted in an agreement on four de-escalation zones across Syria, which have sharply reduced fighting in the conflict zones. The fourth zone covers Idlib, and al-Nusra has said it would not respect the agreement.

Western countries, including the US, which sponsor the anti-Damascus militants, have largely been sidelined in the diplomatic efforts in Geneva, especially as a series of UN-backed talks which the Western governments favor has achieved little success in comparison with the Astana talks.

Elsewhere in his comments, Muallem said that thanks to the fruitful cooperation between Syrian and Russian forces, the fight against extremists in Syria was approaching its end.

The Syrian people “are getting more and more confident that they are writing the last chapter of the crisis,” he said.

Additionally, the top Syrian diplomat accused the US of seeking to hamper the counterterrorism offensive led by Syrian troops in the city of Day al-Zawr.

“The Americans have not changed their approach so far. In Dayr al-Zawr, they attempt to impede our army’s advances against ISIS (Daesh),” he said.

US, Russia should coordinate actions in Syria: Lavrov

Separately on Friday, the Russian foreign minister regretted the lack of cooperation between the US and Russian forces in Syria, noting that “to deal a final blow to terrorists in fact, not just deconflicting is needed, coordination is necessary.”

He also said that Moscow had made it clear to Washington that it would not sit idle if US-backed Syria militants attempted any provocation.

“We have sent a clear message that if there are attempts to complicate the end of the counterterrorism operation from the areas that are close to American ‘friends’… it will not be left without reaction,” Lavrov said.

In Dayr al-Zawr, the Syrian military and its allies are pushing to liberate the city. A ragtag grouping of militants that receives support from the US and that does not coordinate with the Syrian military has also been advancing toward the city from another front.

Russia had issued a similar warning on Thursday, saying that it would strike back if the positions of Syrian government forces in Dayr al-Zawr came under attack by US-backed militants.

Russia says Syrian troops in the Dayr al-Zawr province have been twice targeted with mortar and rocket fire from the regions where US-backed militants are based.