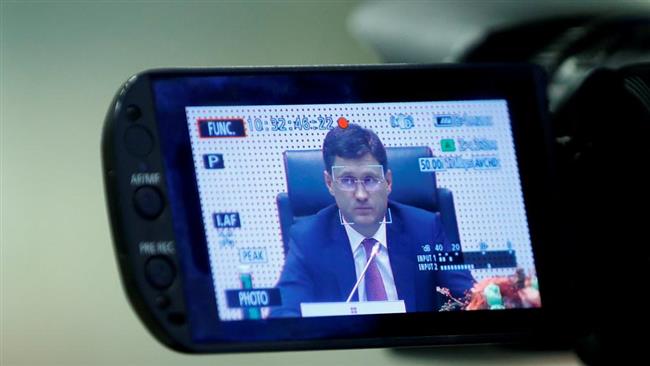 TEHRAN, Young Journalists Club (YJC) - Asked in Vienna on Friday when he thought the long-heralded deliveries would finally begin, Novak said, "I hope, in the coming future,” Russia’s Tass news agency quoted him as saying.

“Arrangements are at the finalizing stage,” he said, according to the news agency which also cited feedstock importer Promsyryeimport as the company which would take the deliveries.

Novak said last month the two sides were discussing sales of 100,000 barrels per day (bpd) of Iranian oil to Russia, with supplies being “either physical or swap-based” and that the deliveries could begin within a month.

“We are finalizing the last details of regulatory documents. I think I will respond to your question within one month," he told reporters on the sidelines of an international fair in the Turkish city of Izmir.

The arrangement dates back to 2014 when Iran tried to boost vital energy exports in the face of intensified Western sanctions. At the time, it was said that Moscow and Tehran were discussing a barter deal that would see Moscow buy up to 500,000 bpd of Iranian oil in exchange for Russian equipment and goods.

The initial arrangement was for swapping around 300,000 bpd via the Caspian Sea and the rest from the Persian Gulf, possibly Bandar Abbas port.

Not in a hurry

However, Russia appears not to be in a hurry as it is discussing a possible extension of oil supply curbs with major producers to clear a glut that has weighed on crude prices for three years.

On Friday, Novak met with ministers of the Organization of the Petroleum Exporting Countries (OPEC) in Vienna where they said they were still halfway toward clearing the global glut.

The ministers, however, stopped short of taking additional action amid reports that they wanted to wait until January before deciding whether to extend the curbs beyond the first quarter of 2018.

The producers are heartened by an apparent market recovery which has seen the international benchmark Brent rise to a six-month high to more than $56.

The recovery has raised doubts about further commitment of the producers to consume the remaining overhang as well as the need to extend output cuts.

Novak suggested that Russia’s commitment to the deal was not open-ended.

“A gradual, slow exit strategy could begin between the second and fourth quarters of 2018 when demand can absorb additional supply,” Bloomberg quoted him as saying.

Iran is exempted from the agreement struck originally in November 2016 as its oil production was affected by factors other than the global glut that sank prices.

In fact, Iran’s oil exports more than halved after the West intensified sanctions on the Islamic Republic in 2011, prompting countries such as Saudi Arabia to ramp up production which led to the current glut, Presstv reported.

Since the lifting of sanctions in February 2016, Tehran has been raising production to claw back its market share.

Minister of Petroleum Bijan Zangeneh on Thursday said Iran had a major quarrel with non-OPEC producers over its push to win back the market share but it did not back off in the face of “many bad things which were said.”

“We didn’t listen to any of them and I said we would never accept that our production fall below the pre-sanction level,” said Zangeneh who also warned of a rapid fall in Iran’s oil production due to delayed investment.