TEHRAN, September 23 - A group of international journalists and activists have called on the UN to put an end to the “Muslim holocaust” in Myanmar, warning that the “worst bloodshed” after the World War II looms ahead as a result of the ongoing atrocities against the Rohingya Muslim minority group. 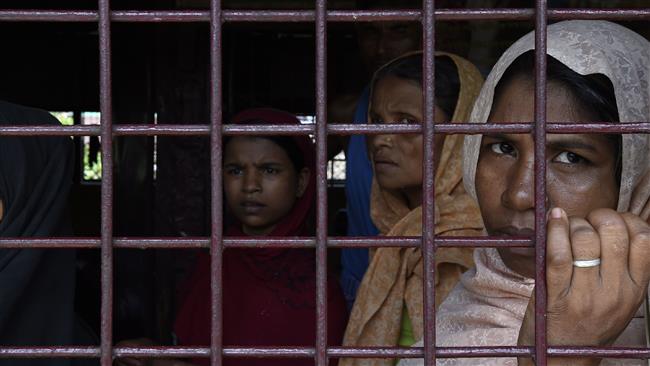 The letter expressed deep concern over the murder and displacement of thousands of Muslims in Myanmar who are deprived of their citizenship rights and forced out of their homes while their farms and cottages are burnt.

The journalists warned that while the international community, including the US and EU, have imposed an arms embargo against the government in Myanmar, Israel is “the main arm supplier of Myanmar and continues to arm Burma military amid ongoing violence against Rohingya Muslims.”

“It is noteworthy that all these crimes are happening before the Myanmar's Nobel Peace Prize winning Aung San Suu Kyi, who not only refrains from condemning these crimes against humanity, but also claimed that the situation is being twisted by a ‘huge iceberg of misinformation’,” the letter pointed out.

Rohingya Muslims in Myanmar’s Rakhine state have been subject to systematic persecution and violence at the hands of the military and Buddhist mobs for decades.
The minority group has been facing an escalated campaign of horrific violence since late last year, when the military laid siege to Rakhine. There have been widespread reports and eyewitness accounts of killings, raping, indiscriminate shootings at fleeing civilians, and the burning down of houses.

The Myanmar government claims it is fighting militants in the area, but the UN says the situation is better described as the “ethnic cleansing” of the Rohingya Muslims, whom the government refuses to recognize as citizens despite the fact that the 1.1-million-strong population has been living in the country for generations.

Over the past month, nearly 430,000 Rohingya have fled from the brutal army-led crackdown across the border in Rakhine. The recent exodus of Rohingya has brought the number of refugees from Rakhine living in Bangladesh to over 800,000.

Bangladesh state officials said on Saturday that the influx of Rohingya refugees into Bangladesh has come to a virtual halt. The officials gave no reason for the dramatically reduced numbers.

However, Rohingya Muslim leaders said the influx of refugees has stopped probably because villages located near the border in Myanmar's Rakhine state are now empty.

According to Human Right Watch, new satellite images show that 99 percent of the villages in Rakhine have been destroyed.

On Friday, Amnesty International said Myanmar’s military and vigilante Buddhist mobs continue to set fire to Rohingya Muslim villages in Rakhine, despite the claims by Suu Kyi that army operations have ended there.

The government forces in Myanmar do not even spare the fleeing Rohingya refugees. Recent reports by Amnesty International and Bangladeshi officials say the military plants landmines on the path of those trying to cross into Bangladesh, causing them to sustain serious wounds or lose their limbs.