Enemies to regret any wrong move against Iran: Commander warns

TEHRAN, September 23 - A high-ranking Iranian military commander reiterated that the country’s Armed Forces are completely ready to respond to any wrong action against the Islamic Republic. 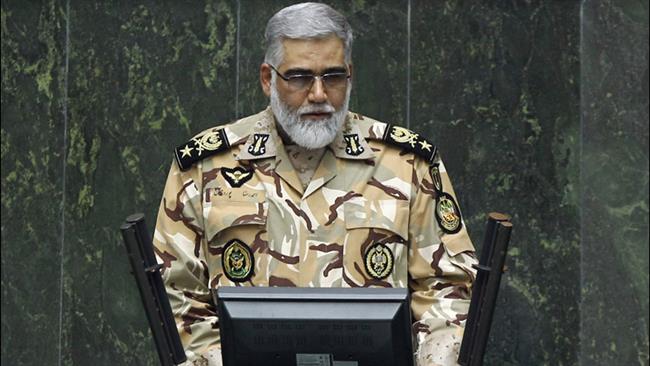 TEHRAN, Young Journalists Club (YJC) - “We are monitoring threats and boosting the defense capabilities of the Islamic Republic of Iran’s Army accordingly,” the second-in-command of the Iranian Army, Brigadier General Ahmad Reza Pourdastan, said on Saturday.

“We are fully ready to counter Daesh in Iraq, Syria or any other places,” he added.

He noted that the Iranian Army has conducted various exercises and tactics and is in complete command of the situation, saying it is prepared to fulfill its duties.

Pourdastan emphasized that all enemies’ moves have been so far thwarted due to the active presence of Iran’s Navy and the acts of bravery of the Air and Ground Forces.

He said the Islamic Republic is currently capable of manufacturing weapons and displaying its might beyond the country’s territorial waters and even in the Indian Ocean.

In recent years, Iran has made major breakthroughs in its defense sector and attained self-sufficiency in producing important military equipment and systems.

“As long as the rhetoric of some [countries] is one of threat, Iran’s reinforcement of its defense power will continue,” the Iranian defense minister said, adding, “Iran will not seek permission from any country to produce different missiles, and land, naval, and aerial defense weapons.”

Iran has also conducted major military drills to enhance the defense capabilities of its armed forces and to test modern military tactics and state-of-the-art army equipment.

The Islamic Republic maintains that its military might poses no threat to other countries, stating that its defense doctrine is merely based on deterrence.