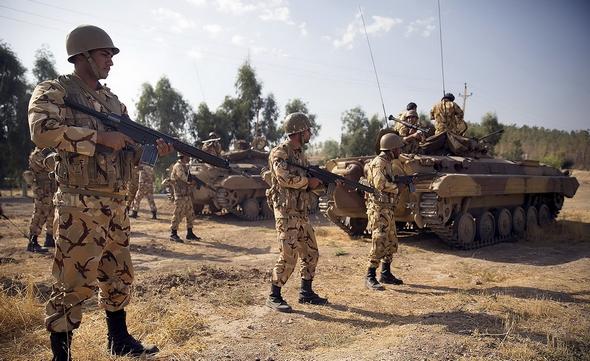 The exercises are part of annual events held in Iran to mark the former Iraqi dictator Saddam Hussein's invasion of Iran in 1980 which led to an eight-year war.

The military maneuvers, centered in the Oshnavieh border region, and involve artillery, armored and airborne units.

The main part, which is already underway, involves practicing of defensive preparedness by infantry, armored, electronic warfare, and rocket units, as well as the ground-operating squadrons of the IRGC.

The Hamzeh Seyyed al-Shohadah Base of the IRGC ground forces plays the central part in the maneuvers.

The country’s southwest has repeatedly witnessed inroads by terrorist and anti-revolutionary elements and hence constitutes a focus of the IRGC’s counter-terrorism operations. Clashes with PJAK militant groups based in Iraq are a frequent occurrence in the border area.

Also on Sunday, Iran’s Army unveiled three new achievements in the area of artillery fire, named as Heydar 7, 41, and 44 Projects, in the presence of Brigadier General Kioumars Heydari, the commander of the Army's ground forces.

Heydar 7 comprises an eight-wheel drive vehicle, equipped with a new turret and a 23-millimeter gun.

Heydar 44 has witnessed a 122-millimeter rocket launcher system being made smart and automated, resulting in sped-up and more precise fire, as well as its becoming interconnected with frontline surveillance drones, suitable for installment on all artillery systems.