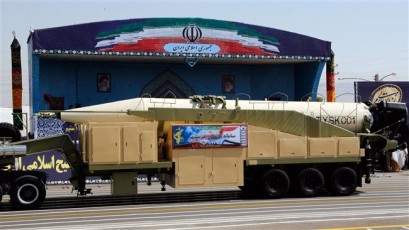 “There is no ban that might prevent Iran from testing missiles,” Mikhail Ulyanov, the head of the Russian Foreign Ministry’s Non-Proliferation and Weapons Control Department, said on Tuesday.

He also noted that a “compromise” was made over Iran’s missile activities under the 2015 multilateral nuclear deal, known as the Joint Comprehensive Plan of Action (JCPOA), which was signed between Tehran and the P5+ states, namely the US, Russia, China, France, Britain plus Germany.

“The previous ban, contained in the UN Security Council resolutions, was canceled to be replaced by a call addressed to Iran to refrain from launching ballistic missiles - not any missiles, though, but only those capable of serving as WMD (weapon of mass destruction) delivery vehicles,” Ulyanov said.

He was referring to UN Security Council Resolution 2231 that cancelled earlier resolutions on Iran and effectively turned the JCPOA into international law.

Ulyanov further stressed that there was no basis for the suspicion that Iranian missiles are designed to carry a nuclear warhead or WMD.

The JCPOA “works,” he said. “There are no nuclear weapons in Iran. Nor are there any chemical or bacteriological ones. No such charges have ever been addressed to Iran. So what’s the problem?”

“Everybody understands that Iran has not the slightest reason for such [missile] strikes,” the Russian official concluded.

The missile, which is Iran’s third type of missile with a range of 2,000 kilometers along with the Qadr-F and Sejjil ballistic missiles, is capable of carrying multiple warheads.

The US, Britain and France raised concerns about the missile test, claiming that it was inconsistent with UN Security Council Resolution 2231.

Iran, however, maintains that its tests are solely for defense purposes, and that its missiles are not designed to carry nuclear warheads.

Under the deal, Iran applied some limits to its nuclear program in exchange for the termination of all nuclear-related sanctions against it.

Since January 2016, when the JCPOA entered into force, he International Atomic Energy Agency, which monitors Iran’s compliance, has in several reports confirmed Tehran’s full commitment to its side of the deal.