Duterte says US should help Manila with war on drugs

TEHRAN, September 27 -The Philippines’ President Rodrigo Duterte says the United States should help Manila with efforts to fight drug gangs from Hong Kong and Taiwan, which he says use his country to ship methamphetamine to America.

TEHRAN, Young Journalists Club (YJC) -The Philippines’ President Rodrigo Duterte says the United States should help Manila with efforts to fight drug gangs from Hong Kong and Taiwan, which he says use his country to ship methamphetamine to America.

During a speech on Tuesday, Duterte blamed gangs from Taiwan and Hong Kong for using his country as a shipping hub to smuggle drugs to the US. He said Washington had a responsibility to help stop the smugglers.

“The Philippines is a transshipment of shabu (local term for methamphetamine) to America,” he told members of the Philippine Constitution Association. “It behooves upon America to work closely with the Republic of the Philippines, especially on this serious matter.”

He also said illegal drugs had funded the terrorists who have seized parts of the southern city of Marawi. The president claimed that the conflict had been triggered by an attempt to arrest a drug figure, whom he did not identify. 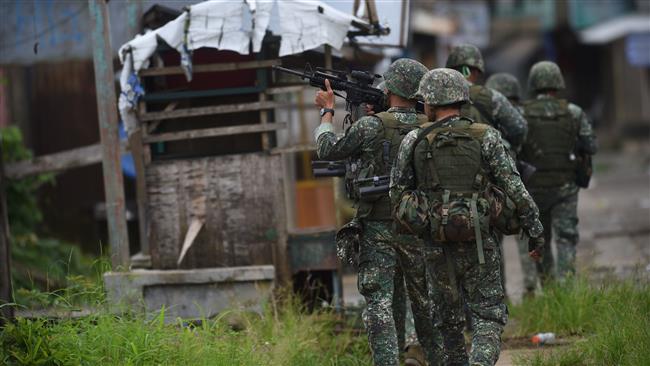 Duterte seemed to suggest that the Philippines had been overwhelmed by drug criminal gangs.

“We are flooded with drugs. This is the first time I would reveal it... The Philippines today is a client state of the Bamboo triad. They have taken over the operations,” he said.

Duterte has deployed thousands of troops to Marawi and imposed martial law across the entire southern region of Mindanao ever since hundreds of terrorists launched an offensive in Marawi on May 23. More than 800 people have so far been killed in the conflict.

The US has been providing reportedly limited logistical help with the operations in Marawi.

The US participation in the Marawi operations and Duterte’s Tuesday call for US help in other areas come despite strained ties between his government and Washington. Duterte has formerly called for the withdrawal of US troops from the Philippines and has had harsh words for Washington because of criticism against his war on drugs.

Duterte had vowed to end drug smuggling in the Philippines in six months when he was elected 16 months ago. Later, however, he admitted that the country did not have the resources to do that.