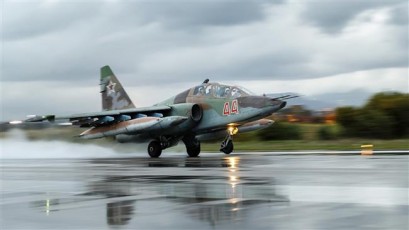 In addition to the Nusra commanders, the Idlib air raid also killed 32 militants and destroyed a militant “ammunition and explosives depot and six SUVs with large-caliber weapons,” he added.

“Special measures to find and destroy all the militants involved in the attack on Russian troops in Syria continue,” Konashenkov noted.

On September 18, terrorists tried to capture a unit of the Russian military police in Hama tasked with monitoring one of the four de-escalation zone in Syria, which were brokered by Iran, Russia and Turkey to reduce fighting in the Arab country. Three Russian forces were injured in the assault.

“After the terrorist attack on September 18 against the Russian military police in the Hama Province the entire multilevel intelligence system of the Russian Defense Ministry in Syria was used to search for and destroy commanders of the attacking militants,” Konashenkov said.

Separately on Tuesday, Mikhail Ulyanov, the head of the Russian Foreign Ministry’s Non-Proliferation and Weapons Control Department, said that Moscow had evidence that terrorists used sarin gas in the April 4 attack on the town of Khan Shaykhun in Syria’s Idlib that left more than 80 people dead.

“We are following the situation very closely, taking part in the attempts to establish the truth. I can tell that today, the whole set of our data is objectively pointing at the terrorists. To all appearances, they set off a sarin explosive device on the ground with the aim of staging a provocation, as they knew that the blame will be put on Damascus,” Ulyanov said.

The Western countries rushed to hold Damascus responsible for the Khan Shaykhun incident, with the US launching a missile attack against Shayrat Airbase in Syria’s Homs Province on April 7.

Washington claimed that the air field targeted in the missile raid was the origin of the April 4 purported chemical attack.