TEHRAN, September 27 -The Spanish government will deploy extra police forces at any polling stations that authorities in Catalonia manage to set up in Spain’s autonomous region to prevent people from voting a banned independence referendum. 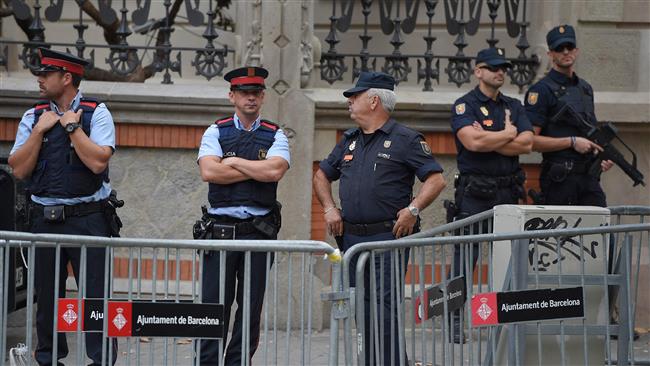 TEHRAN, Young Journalists Club (YJC) -Catalonia’s prosecutor has ordered the region’s police force to take control of any polling booths that potentially get set up at schools and civic buildings, said a spokesman for the Spanish government’s Catalan delegation on Tuesday.

He said police was also instructed to identify those in charge of facilitating the Sunday vote. “The order has been conveyed and it will be executed with all normality.”

Meanwhile, the Spanish government’s representative in Catalonia, Enric Millo, has said that “there will be no effective referendum in Catalonia.”

“All the referendum’s logistics have been dismantled,” Millo said.

But it was not clear how any polling stations would still be set up and extra police forces would be stationed at them if, according to Millon, all logistics have been dismantled.
The government increased pressure on the Catalan officials over the past week to halt the vote, which it says is a violation of the constitution.

Raids were carried out by Spain’s military police on Catalan government offices, during which at least 14 junior officials and associates were arrested and almost 10 million ballot papers were seized. Government websites informing Catalans about the election have also been shut down.

The Catalan regional government, however, has insisted the unilateral poll will go ahead on Sunday.

Meanwhile, Spanish Prime Minister Mariano Rajoy has canceled a visit to Estonia, where was scheduled to attend an EU heads of state summit on Friday.

“It was considered that it would be best if he was here for the cabinet meeting on Friday due to the Catalonia question,” AFP quoted a government source as speaking on condition of anonymity.

Speaking earlier in Washington alongside US President Donald Trump, Rajoy said a unilateral declaration of independence would be “very wrong.”
Trump, who repeatedly referred to Rajoy as “president,” sided with Madrid, saying it would be “foolish” for Catalans to try to leave Spain.

“I think that Spain is a great country and it should remain united,” he said.

Catalonia’s regional president, Carles Puigdemont, has accused Rajoy of acting “beyond the limits of a respectable democracy” to prevent the vote.

Puigdemont has promised to declare independence within 48 hours of a victory for the yes campaign.

But, with all the restrictions in place, it is unclear how the referendum would be physically carried out.

Spain’s attorney general José Manuel Maza said on Monday that Puigdemont could face prosecution for disobedience. He warned that the regional president could be arrested for misuse of public funds, which carries a jail sentence.