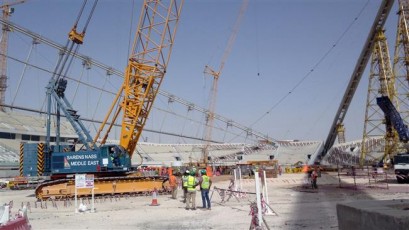 TEHRAN, Young Journalists Club (YJC) -The Human Rights Watch (HRW) has slammed the failure of World Cup 2022 host Qatar to protect 800,000 foreign construction laborers from the country’s extremely high temperature and called for investigation into the large number of worker deaths due to scorching heat.

“The Qatari authorities’ failure to put in place the most basic protection from the heat, their decision to ignore recommendations that they investigate worker deaths, and their refusal to release data on these deaths, constitutes a willful abdication of responsibility,” HRW said in a Wednesday report.

Author of the report Nicholas McGeehan called on FIFA, national associations and World Cup sponsors to ask for more protection from heat and humidity for laborers working in Qatar.

Qatar has introduced laws which prohibit working outdoors between 11:30 a.m. and 3:00 p.m. from June 15 to August 31, when temperatures can reach around 50 degrees Celsius, but the HRW argues that such measures fall short of protecting the laborers from harsh working conditions.

The HRW’s new report stressed that Doha must be more transparent with regard to the issue of worker deaths and urged respective Qatari and international bodies to demand answers for “two simple questions: How many workers have died since 2012 and how they have died?"

Out of the 520 deaths figures last made available in 2012 for workers from Bangladesh, India and Nepal, 385, or 74 percent, were “neither explained nor investigated,” the report pointed out.

In December 2016, the Qatari government replaced the country’s notorious “kafala” sponsorship system, which forced foreign workers to seek their employer’s consent to change jobs or leave the country - a practice which rights groups say leaves workers open to exploitation.

Despite the reforms, activists say Qatar still refuses to allow scores of migrants from countries including India, Nepal and Bangladesh to return home.

Trade unionists and activists say migrant workers still require an exit permit from the government and that more than a quarter of permit requests made by migrants have been denied since the reforms were introduced.