TEHRAN, September 27 - Russia, Iran and France have warned that a controversial secession referendum held in Iraq’s semi-autonomous Kurdistan region could lead to further instability in the entire Middle East, a region already rife with numerous conflicts and terror threats. 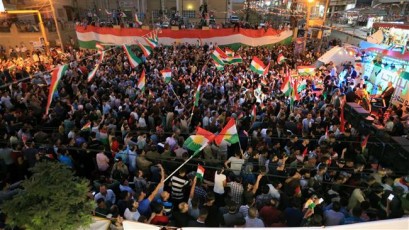 The Russian Foreign Ministry said in a statement on Wednesday that Moscow respects the Kurds’ ambitions, but believes the dispute over the status of Iraqi Kurdistan could be settled through talks with Baghdad.

“The Russian party believes it to be of utmost importance to avoid anything that risk to further complicate and destabilize the Middle East, which is already overloaded by conflict situations,” the statement read.

It further noted that Moscow continues to support the sovereignty and territorial integrity of Iraq and other Middle Eastern states.

The Kurdistan row “can and should be resolved with constructive and respectful dialogue aimed at finding a mutual form of coexistence in a unified Iraqi state,” the statement added.

The Kurdish plebiscite took place on September 25, with initial results indicating an overwhelming ‘Yes’ vote for secession from the mainland.

The referendum has sparked strong objections from the central government in Baghdad, which views the referendum as unconstitutional.

Except for the regime in Israel, the entire international community, especially Iraq’s neighbors, has voiced concerns over the repercussions of the vote.

Separately on Wednesday, 210 out of 290 lawmakers in the Iranian Parliament (Majlis) issued a statement, condemning secessionist moves by the Iraqi Kurdistan region and supporting the Baghdad government.

“Over the past years, the country of Iraq has witnessed different conspiracies by the US and the Zionist regime, but the steadfastness, solidarity and resistance of the Iraqi nation, including Arabs and Kurds as well as Sunnis and Shias, foiled all the plots [hatched] by the arrogance,” the statement read.

With the help of popular forces, Iraq has managed to rid the country of Daesh terrorists, but conspiracies have not come to an end, said the statement, adding that the Kurdish referendum could damage the Iraqi national unity and territorial integrity and drag the country into a new wave of tensions.

Iran believes any new crisis would “to the detriment of the democratic path in the country” as well as the whole region, it added.

The MPs further called on the Iranian government to cooperate with Baghdad and “do not allow Zionists to make adventure in Iraq.”

In a relevant development on Wednesday, France warned of the destabilizing effects of the independence vote and urged the Iraqi government to give the Kurds greater autonomy.

French Foreign Minister Jean-Yves Le Drian told BFM TV, “It does not seem timely today to have independence ... but (if) a declaration of independence happened it would provoke new major crises in the Middle East at a time when Daesh is being defeated in Iraq.”

It is “desirable” that the Iraqi Kurds integrate “in the reconstruction of Iraq, reconciliation of Iraq by having the greatest amount of autonomy possible,” he pointed out.