TEHRAN, September 27 -The independence referendum in Iraq’s semi-autonomous Kurdistan Region, which was held in defiance of international calls to scrap it, continues to draw criticism from governments around the world. 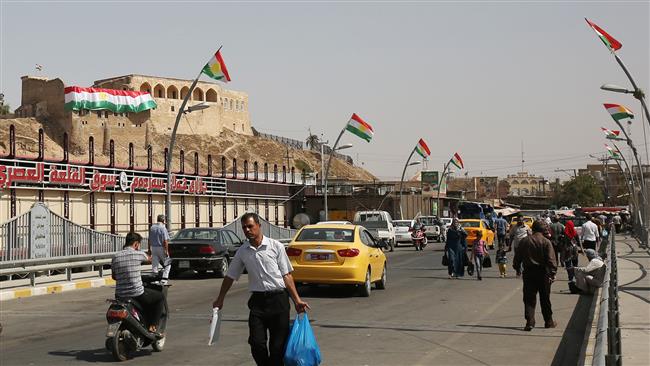 Scott Rickard believes that the United States and Israel have worked in tandem to create chaos in the Middle East, because an independent Kurdistan Region will mostly benefit Washington and Tel Aviv.

The fact that Israeli authorities have been the first to come out in support of a sovereign Kurdish nation is proof of the Kurdistan Regional Government’s good relations with the Tel Aviv regime, he noted.

According to the analyst, Kurds have traditionally been on good terms with the West and have therefore constantly worked on behalf of Western governments in the region.

Rickard pointed to “a serious amount of Western influence” manipulating the Middle East for some time, and suggested that the United States and Israel are both involved in the ongoing developments taking place in the region.

“The Americans have given over 500 billion dollars worth of weapons to the region most recently. It is a tremendous amount of weaponry that has been put in that region. The fact is that there are 200,000 Kurdish Jews that migrated to Israel that work in the intelligence community. They have been advising the Kurds for over half a century since Israel was manufactured,” he said.

Elsewhere in his remarks, the analyst dismissed the idea that Kurdish People’s Protection Units (YPG) are helping the United States fight Daesh in Syria, asserting that Washington itself has created the terrorists to wreak havoc in the war-torn Arab country.

“I find it very odd that people forget the history of what the Americans have caused in the region. The fact is the Kurds for centuries have been fighting against many of their neighbors. Certainly everyone deserves some sort of sovereignty and peace. But when you talk about the types of insurgencies that the West has absolutely caused in that region and the kinds of arming and weaponry that has put in that region to cause chaos, that is not the Kurds’ fault. But at the same time, the Kurds have not helped themselves with their allies,” he stated.

Rickard further asserted that the Kurdish issue is a century-old problem, arguing that Kurdish tribes have been at war with each other for hundreds, if not thousands, of years.

However, he said, if the Kurds really want to have self-determination, they should think about how to operate fairly because they have not been cooperating as a “fair partner” in Iraq.

Meanwhile, Jack Rice, the other panelist on the program, noted that an independent Kurdish state could have a “domino effect” and would provoke other Kurds in Iran, Turkey, Syria, Armenia and elsewhere.

He also predicted that Kurdistan’s independence will increase tensions among Kurdish groups themselves.

The analyst further claimed that Washington’s opposition to the Kurdish independence referendum was just “a show for the cameras,” adding that the United States has always played the Kurds against one another.

The US has opposed the referendum, saying it was “deeply disappointed” by the Iraqi Kurdistan’s “unilateral” independence referendum which would increase “hardships” for people living in the region.

He went on to say that the United States has exacerbated many of the problems in the Middle East, and has continually supported totalitarian dictatorships in the region.
Rice further opined that Kurds have the right to self-determination, given that they have been ignored, dismissed, diminished and minimized at every level throughout history.

However, he said, there has always been timing problems and every time the Kurds talked about gaining independence, they were pushed back.

According to the analyst, if the Kurds can create their own country for the benefit of themselves, rather than the benefit of Israelis or Americans, that might bring stability, not in the short term but perhaps in the long run.