TEHRAN, September 27 - US President Donald Trump will unveil a proposal to cut personal and corporate taxes by at least $5 trillion over 10 years, under a sweeping White House and Congressional plan that aims to slash the corporate tax rate by 15 percent, one of the lowest rates in the industrial world. 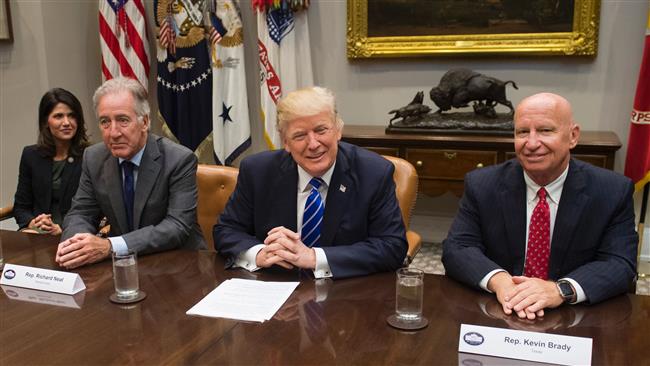 TEHRAN, Young Journalists Club (YJC) - The corporate tax rate would be cut from its present 35 percent — a level that US companies say hurts them in the global market.

The average top corporate tax rate worldwide is 22.5 percent. The new proposed US rate is below France’s 34 percent, Australia’s 30 percent and Japan’s 23 percent.
Still, the 20 percent corporate tax rate is short of the 15 percent Trump promised as a candidate and advocated for since reaching office.

But the tax cuts still represent a bigger win for companies than some skeptical executives had anticipated.

The new tax plan was hammered during months of negotiations between Treasury Secretary Steven Mnuchin, National Economic Director Gary Cohn and top Republicans in the House and Senate, a group known as the "Big Six."

Tax reform has become a major theme of unity for the Republican Party amid rising frustration among conservative lawmakers who have failed to repeal and replace Obamacare.

"Tax reform is the most important thing we can do to restore confidence to this country, to get jobs and prosperity and that's why we are so singularly focused on getting this done this year," House Speaker Paul Ryan, a Big Six member, said on Tuesday.

This could leave Trump's large populist base feeling that the president is breaking his campaign pledge to make tax reform benefit the middle class and blue-collar America.