TEHRAN, September 28 - Japanese Prime Minister Shinzo Abe has officially dissolved the lower house of the country’s parliament, paving the way for snap elections in which he hopes his party will put up a better showing. 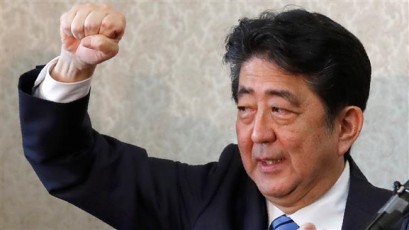 He had on Monday stunned the island country — the world’s third-biggest economy — with a surprise call for snap elections and had said he would dissolve the parliament on Thursday.

The snap polls are expected on October 22.

The ruling Liberal Democratic Party-led (LDP) coalition argues that the vote is needed now also to secure a fresh mandate for the premier’s decision to change the way the government will use future tax revenues, as well as its handling of the recent tensions with Pyongyang.

However, Abe faces a tough challenge from the popular governor of Tokyo, Yuriko Koike, whose newly-born Party of Hope has begun attracting an influx of legislators from a wide array of ideological backgrounds, unifying a formidable opposition to the 65-year-old prime minister.

“This will be a tough battle, but it’s all about how we will protect Japan, and the lives and peaceful existence of the Japanese people,” Abe told a group of lawmakers on Monday.

Koike’s emerging party may be able to field a greater number of candidates nationwide over time; and Abe, unwilling to let that happen, also appears to want the snap election to come at an early time to deprive her of that opportunity.

Koike has already opposed a hike in taxes planned for October 2019. She has also called for Japan to get rid of its nuclear power plants, while Abe’s government plans to maintain nuclear power as a key ingredient of the energy mix despite public serious concerns about safety following the 2011 Fukushima nuclear crisis.