TEHRAN, September 28 - Amnesty International has called on the United Nations Security Council to spare no efforts to end the brutal crackdown against Rohingya Muslims in Myanmar, suggesting the imposition of a “comprehensive arms embargo” on the Southeast Asian country. 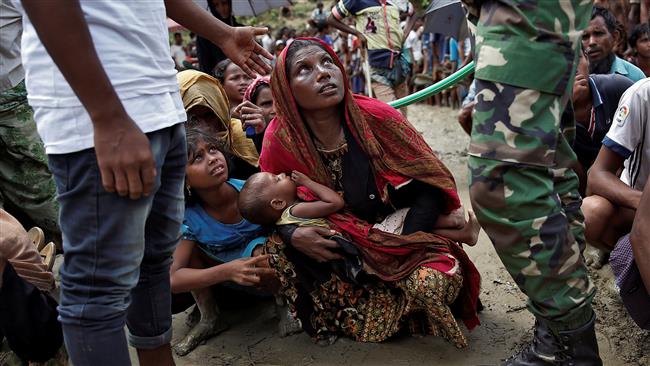 TEHRAN, Young Journalists Club (YJC) - The London-based rights group made the plea on Wednesday, a day before the Council is to hold a public session in which UN Secretary General Antonio Guterres will brief members on the ongoing crisis in Myanmar’s Rakhine State.

“The Myanmar military is forcibly displacing and killing Rohingya, a campaign of crimes against humanity that amounts to ethnic cleansing,” said Tirana Hassan, Amnesty’s crisis response director. “When they meet on Thursday, UN member states must ask themselves what side of history they want to be on and do everything they can do end this nightmare. Together, they do have the power to pressure Myanmar to end the violence.”

She said the Council should “put an immediate end to the transfer of all arms, munitions and related equipment to Myanmar by imposing a comprehensive arms embargo.”

Hassan said any indirect arms supply to Myanmar and “training and other assistance” to the country also had to end.

The meeting will come as more than 400,000 people, mostly Rohingya Muslims, have fled a campaign of government-sanctioned violence in Rakhine over the past weeks and crossed into Bangladesh.

he de facto leader of the country, Aung San Suu Kyi, whose stance on the violence being carried out under her watch has earned her a reputation as an apologist for the abusive forces, recently claimed that no violence had taken place since September 5.

“This crisis is far from over, and there is no question that violations are continuing unabated inside Rakhine State. More than ever, the world needs to take a strong stand and push Myanmar and its security forces to end the horrors they are inflicting on the Rohingya population,” the Amnesty official said.

She said a Security Council condemnation of the violence in Myanmar was warranted.

The Council has already held two meetings behind closed doors since the fresh wave of violence began against the Rohingya on August 25. In an informal statement issued earlier this month, the 15-member body condemned the situation in Myanmar and called for “immediate steps” to end the violence there.

Rohingya Muslims in Rakhine have been subject to systematic persecution and violence at the hands of the military and Buddhist mobs for decades.

The minority group has been facing an escalated campaign of horrific violence since late last year, when the military laid siege to Rakhine. There have been widespread reports and eyewitness accounts of killings, rapings, indiscriminate shootings at fleeing civilians, and the burning down of houses.

Myanmar’s government claims it is fighting militants in the area, but the UN says the situation is better described as the “ethnic cleansing” of the Rohingya Muslims, whom the government refuses to recognize as citizens despite the fact that the Rohingya have been living in the area for centuries.