TEHRAN, September 29 - Russian President Vladimir Putin said the establishment of de-escalation zones in Syria is paving the way for the final defeat of terrorists and the end of a years-long war in the crisis-hit Arab country. 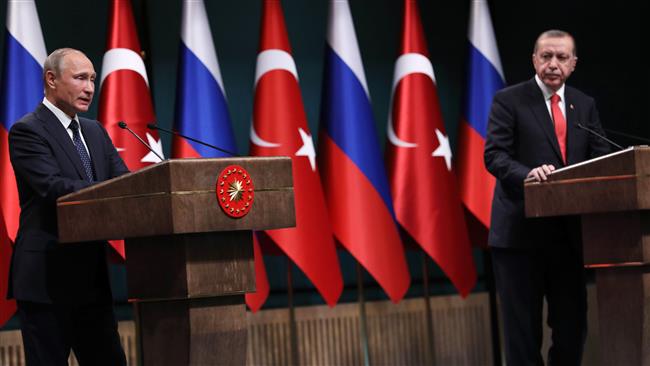 TEHRAN, Young Journalists Club (YJC) - The Russian leader made the remarks at a joint press conference with his Turkish counterpart Recep Tayyip Erdogan in Turkey’s capital Ankara during a visit to the country on Thursday, saying the so-called zones have created the "de facto conditions necessary for the end of the fratricidal war in Syria and the final defeat of terrorists as well as for the Syrian people’s return to normal life.”

Back in May, the fourth round of the intra-Syrian talks, held in Kazakhstan's capital Astana, resulted in an agreement on creating four de-escalation zones across Syria, with Russia, Iran, and Turkey serving as guarantor states.

Three of the safe zones have been created to date in Syria’s central province of Homs, in the Eastern Ghouta area of the southern Rif Dimashq province, and a southwestern militant-controlled stretch along the border with Jordan. They have sharply reduced fighting in the conflict zones.

The push for establishing the fourth zone, to be created in Syria's northern province of Idlib, still continues. Earlier this month, Moscow, Tehran, and Ankara agreed on the details of a safe zone in the province, which borders Turkey and is largely under the control of al-Nusra Front Takfiri militants.

The Russian and Turkish leaders on Thursday asserted that they had agreed to make further push for the creation of the Idlib de-escalation zone to help end the seven-year-long foreign-backed militancy in Syria.

“We are creating conditions for the refugees' return, and — which is of principal importance — for stepping up the search for a long-term political settlement in Geneva,” Putin further said, referring to the next round of the UN-brokered peace talks to be held in the Swiss city.

He also noted that Moscow and Ankara would work “with the aim of deepening the coordination of joint activity to solve the Syria crisis.”

Erdogan, for his part, underlined the need for a “joint political will” to resolve the Syrian crisis.

“We have discussed the developments in our region, including Iraq and Syria. We are of the same opinion on the need for the protection of the territorial integrity of both Iraq and Syria,” the Turkish leader said after a three-hour meeting with Putin, referring to the highly controversial referendum on independence the Kurdish leaders of the semi-autonomous Iraqi Kurdistan region held on Monday.

Meanwhile, despite speculation that Putin and Erdogan would discuss Turkey’s plan to purchase Russia’s most advanced S-400 air defense missile system, neither side mentioned the deal for which Turkey said earlier this month it had paid a deposit.

The agreement has drawn criticism from some of Turkey's other NATO allies, which say the Russian anti-ballistic missiles are not compatible with the Western military alliance's weapons systems.