Beyond the daily drama and Twitter battles, Trump begins to alter American life

TEHRAN, September 29 -Even without delivering on his biggest campaign promises, President Donald Trump has begun to reshape American life in ways big and small. 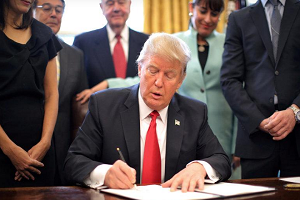 TEHRAN, Young Journalists Club (YJC) -Over his first nine months, Trump has used an aggressive series of regulatory rollbacks, executive orders and changes in enforcement guidelines to rewrite the rules for industries from energy to airlines, and on issues from campus sexual assault to anti-discrimination protections for transgender students.

While his administration has been chaotic, and his decision-making impulsive and sometimes whimsical, Trump has made changes that could have far-reaching and lingering consequences for society and the economy. Some have grabbed headlines but many, no less consequential, have gone largely unnoticed amid the daily controversies and Twitter insults that have marked Trump's early months in office.
Under Trump, oil is flowing through the Dakota Access Pipeline. Arrests of immigrants living illegally in the United States are up. More federal lands are open for coal mining.

The administration has left its mark in smaller ways, as well. Trump has rolled back or delayed Obama-era rules and regulations that protected retirement savings from unscrupulous financial advisers, made it harder for companies that violated labor laws to land federal contracts and restricted what internet service providers could do with their customers’ personal data.

Those kinds of low-profile policy shifts are far from the dramatic change promised by the headline-loving Trump, who won the White House with a vow to fundamentally reshape Washington. But the effects can be just as real.

“Trump is doing an awful lot to shape policy and blow up policy,” said Norm Ornstein, a political analyst at the conservative American Enterprise Institute.

Stymied by his failure to win congressional approval for his big-ticket promises like a repeal of President Barack Obama’s signature healthcare reform, known as Obamacare, and a border wall with Mexico, Trump has turned to administrative action.

He has rolled back hundreds of rules and regulations, signed 47 executive orders and used a previously obscure legislative tool, the Congressional Review Act, 14 times to undo regulations passed in the final months of Obama’s presidency. The law had only been used once before, 16 years ago.

The Trump administration has withdrawn or delayed more than 800 Obama-era regulatory actions in its first six months. Proposals for new rules, including those to delay or rescind existing rules, dropped 32 percent from the same period in 2016 under Obama, and are down from similar six-month periods under presidents George W. Bush, a Republican, and Bill Clinton, a Democrat, according to the libertarian Competitive Enterprise Institute.

At the same time, Trump has limited new federal regulations by requiring agencies to cut two rules for every new one they create. He has asked each agency to name a regulatory reform officer to take aim at unneeded rules.

“By far, this is the most significant regulatory rollback since Ronald Reagan,” said Wayne Crews, vice president for policy at the Competitive Enterprise Institute. “The Trump mode so far is to regulate bureaucrats rather than the public.”

Many business leaders have applauded the moves, aimed at fulfilling Trump’s campaign promise to end policies he says are strangling the economy. But critics say his reductions in environmental and worker protections put corporate profits before public health and safety - in direct contradiction to the populist campaign rhetoric that helped Trump win blue-collar votes.

“Where Trump has had success in changing the rules of the road it has been used against the very people who helped elect him,” said Ben Olinsky, vice president for policy and strategy at the liberal Center for American Progress.

Neomi Rao, who is helping to lead Trump’s deregulatory drive as administrator of the White House Office of Information and Regulatory Affairs, said the reforms would promote economic growth and job creation.

“Regulatory reform benefits all Americans,” she said in a statement, adding that it can have “particular benefits for low- and middle-income workers.”

The “Trump effect” also goes far beyond policy. After a precedent-shattering campaign, Trump has redefined presidential behavior with his freewheeling and sometimes confrontational use of Twitter, his refusal to step away from his businesses and his reliance on family members as top advisers.

He has rattled longtime foreign allies with his sometimes bellicose statements and stoked social and political divisions at home, most recently with his attacks on mostly black professional football players who kneel in protest against racial injustice during the national anthem.
Many of Trump’s biggest policy proposals, including a ban on transgender people serving in the military, withdrawal from the Paris climate change accord and an end to the Obama-era program protecting from deportation young adults brought to the United States illegally as children, remain in limbo or under review in an administration where policymaking is often messy.

But Trump has found ways to make headway on some other stalled initiatives. While a repeal of Obamacare has faltered in Congress, his threats to cut the subsidy payments that help cover expenses for low-income consumers have created enough uncertainty that major insurers have pulled out of some state markets or asked much higher monthly premiums for 2018.

The administration has slashed advertising and cut grants to community groups that help people sign up, raising fears that many people will forgo coverage or forget to re-enroll in health plans for next year.

While plans for a border wall are stalled in Congress, Trump’s tough rhetoric had an apparent effect on illegal border crossings, with the number of apprehensions on the southwest border falling 63 percent from 42,000 in January to nearly 16,000 in April. Since then, they have begun creeping up again, but are still below levels seen last year.

A crackdown on immigrants living in the country illegally also led to a sharp increase in arrests in the interior of the country. In Trump’s first 100 days, the number of arrests by immigration agents increased by nearly 40 percent over the same period a year earlier. The number of immigrants without criminal histories arrested by immigration agents and booked into detention has jumped by more than 200 percent from January to July of this year, according to data reviewed by Reuters.

A flood of lawsuits has been filed against the new Republican administration, with Democratic state officials often leading the charge. The lower federal courts, stocked with judges appointed by Obama, have at least temporarily blocked several Trump initiatives.

Trump has been forced to rewrite a travel ban the administration says is aimed at protecting federal borders after the first two versions faced legal challenges from critics who said it discriminated against Muslims. The latest version imposes travel restrictions on eight countries.

One of Trump’s most lasting accomplishments is likely to be the confirmation of Justice Neil Gorsuch, who restored the U.S. Supreme Court’s conservative majority and at age 50 is likely to serve for decades.

“I think Trump actually has accomplished a lot. There are a lot of things for conservatives to be happy about,” said Tommy Binion, director of congressional and executive relations at the conservative Heritage Foundation. “And I‘m optimistic there will be more.”