TEHRAN, September 29 -The US has accused Myanmar of the "ethnic cleansing" of minority Rohingya Muslims, saying the violent bloodshed in Rakhine state had shamed the government of Aung San Suu Kyi. 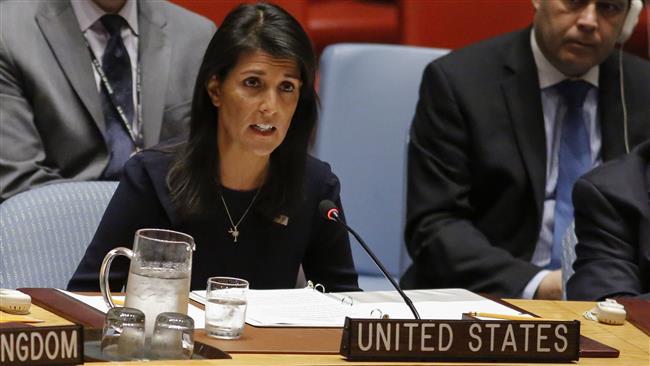 TEHRAN, Young Journalists Club (YJC) - Speaking on Thursday at a UN Security Council meeting in New York, US Ambassador Nikki Haley expressed sharp criticism of Myanmar's civilian government and pressed the UN to consider action against members of the country’s military in response to the violence.

"We cannot be afraid to call the actions of the Burmese authorities what they appear to be: a brutal, sustained campaign to cleanse the country of an ethnic minority," said Haley, using an alternative name for Myanmar

"And it should shame senior Burmese leaders who have sacrificed so much for an open, democratic Burma," she added.

"The time for well-meaning, diplomatic words in this council has passed. We must now consider action against Burmese security forces who are implicated in abuses and stoking hatred among their fellow citizens."

Haley's comments at the UN mark the strongest criticism yet from Washington.

During the same UN Security Council meeting on Thursday, UN Secretary General Antonio Guterres denounced Myanmar for creating a humanitarian “nightmare” for the country's Rohingya Muslims.
Suu Kyi is under fire by the international community and rights groups for allowing the government troops and the Buddhist mobs to impose a violent clampdown on the desperate minority.

Myanmar’s troops have intensified attacks against Rohingya Muslims in Rakhine state, home to over a million members of the desperate minority, since October 2016. The attacks have seen a sharp rise since August.

The volatile Rakhine state has been the scene of communal violence since 2012. Many of the Muslims have lost their lives while tens of thousands have been displaced as a result of attacks by Buddhists. The refugees largely live in camps in dire conditions.

More than 500,000 Rohingya refugees have crossed into the neighboring Bangladesh in recent weeks, creating an unprecedented humanitarian crisis as aid agencies struggle to provide food, clean water and shelter.

Many of those who have managed to take refuge in Bangladesh say Myanmar's soldiers and Buddhist mobs have been attacking civilians and burning down their homes.