TEHRAN, September 30 - Clashes have broken out between Italian riot police and hundreds of people, mostly students, who protested against the policies of the leading industrial powers, known as the Group of 7 (G7), in the northwestern city of Turin. 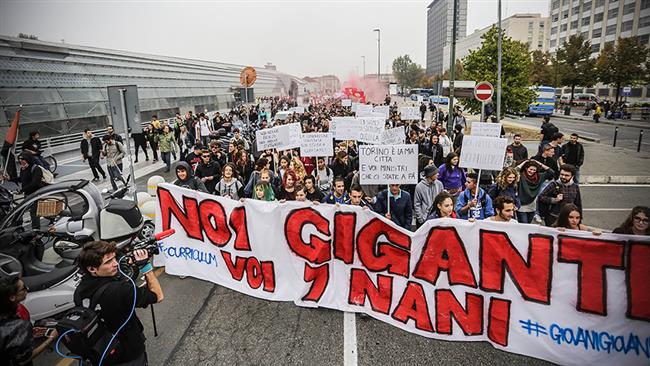 TEHRAN, Young Journalists Club (YJC) -The protests took place in central Turin on Friday as a G7 ministerial meeting on labor was being held at the Palace of Venaria near the city.

Demonstrators marched through Turin's streets chanting, “We are giants, you are the seven dwarves,” as they waved flares and burnt smoke pellets. They also overturned waste bins and pelted police personnel with eggs.

Clashes between protesters and security forces took place when demonstrators attempted to break through a police security cordon around the hotel housing the G7 delegations but faced with police resistance.

Local media said at least three protesters, including a minor, had been arrested amidst the growing tensions.

The working meeting is expected to discuss the opportunities for innovation and technology with the “I7 Innovator's Strategic Advisory team.” It will also focus on the increasing role of digitalization, data protection and privacy.