TEHRAN, September 30 - The High Court in Catalonia has ordered US tech giant Google to remove an application which provided information on where and how to vote in Sunday’s referendum on the region’s independence from Spain. 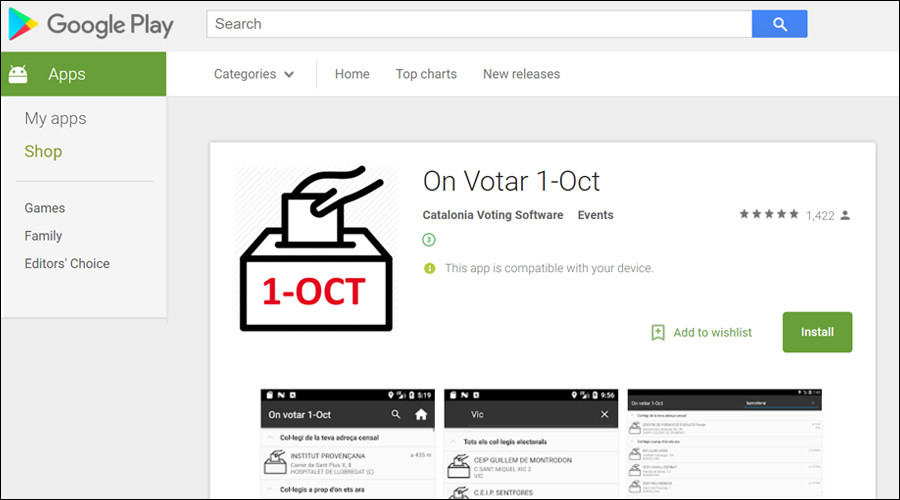 TEHRAN, Young Journalists Club (YJC) - The judge said that the "On Votar 1-Oct" application on the Google Play smartphone app store violated the ruling of Spain's Constitutional Court, which labelled the plebiscite illegal.
Google was also ordered to block any future applications developed by the gmail address "Onvotar1oct@gmail.com," which was behind the banned app.

The judge said the appearance of the app once again showed the "reluctant attitude" of the Catalan government to previous court rulings to block referendum websites.

"They mean to dodge said blockades with computer applications for mobile devices, which, like the web pages, only promote and facilitate the holding of the referendum on October 1," he said.

According to the Spain Report, Google has followed the court order and blocked the app which is now inaccessible from the Spanish territory.

"We remove content from our platforms when we receive a court order or when it violates our terms and conditions," the company said.

The local authorities in Catalonia reiterated on Friday that the vote will go ahead as scheduled on Sunday, despite strong opposition from Madrid.

Spanish authorities have been actively working to prevent the vote as thousands of additional police were deployed to the region, with orders to take control of the voting booths.

Earlier this week, the organization managing the registration of domains ending in .cat was raided by the police.

The .cat Foundation was forced to block websites with information about the referendum in accordance to a court warrant issued serval days earlier.

According to the organization, the court order, which saw stipulated that four four .cat domains related to vote be shut, was “unprecedented and absolute [in] scope.”

Around 140 websites related to the Catalan referendum were taken down in September in accordance with the court orders.

“Regardless of the lawfulness of the referendum, the Spanish authorities have a responsibility to respect those rights that are essential to democratic societies,” UN experts on human rights and the promotion of democratic order said in comments on Thursday.

The experts urged Madrid to ensure that their measures against the referendum “do not interfere with the fundamental rights to freedom of expression, assembly and association, and public participation.”

The UN was referring to the arrests earlier in September of top-ranking Catalonian officials, including Junior Economy Minister Josep Maria Jové. The Civil Guard repeatedly conducted searches of the Catalonian government buildings, and the Catalan president Carlos Puigdemont denounced the “totalitarian attitude” shown by the Spanish state in arresting Catalan officials at that time.

The Spanish state prosecutor also ordered a criminal investigation of 712 Catalan mayors for co-operating with the process.

“The measures we are witnessing are worrying because they appear to violate fundamental individual rights, cutting off public information and the possibility of debate at a critical moment for Spain’s democracy,” the UN experts said.

They also criticized Madrid’s decision to deploy some 4,000 police officers in Catalonia, with an order from the Government to “act in case the illegal referendum takes place”.

“We are concerned that this order and the accompanying rhetoric may heighten tensions and social unrest,” the experts said. “We urge all parties to exercise the utmost restraint and avoid violence of any kind to ensure peaceful protests in the coming days.”

Catalonia is a region of some 7.5 million people in Spain’s north-east, which has its own language and culture, perhaps strongest in its capital, Barcelona.

The previous, informal independence referendum held in the region in 2014 saw 80 percent of those who voted choose independence. Nevertheless, the result was ignored by Madrid as the ballot was ruled unconstitutional.