TEHRAN, October 3 - At least three militants and one Indian soldier have been killed during violent clashes that erupted after an attack on an Indian paramilitary training camp in the disputed Kashmir region. 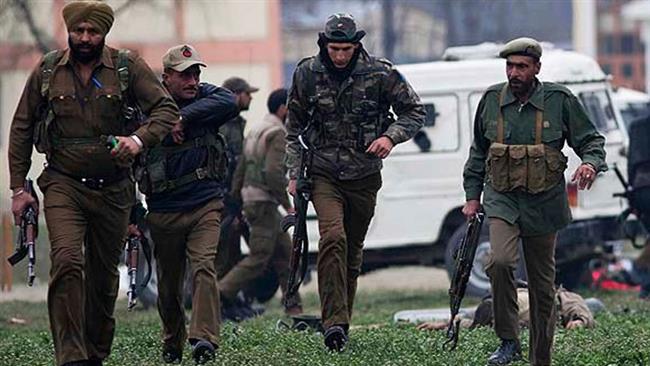 TEHRAN, Young Journalists Club (YJC) -Officials said the militants attacked the camp located near the airport in Srinagar, the largest city in the state of Jammu and Kashmir, AFP reported. The fatalities were caused by the ensuing gunfight, which is still underway.

Three Indian paramilitary forces and a police officer were also injured in the attack in which the assailants – dressed in military combat uniforms -- hurled grenades and fired automatic weapons at the Border Security Force (BSF) base, said Director General of Police S. P. Vaid.

“All the three militants have been killed. An assistant sub-inspector of BSF also died in the initial assault,” said the police authority.

This is while residents of the area said they heard dozens of explosions and gunfire.

The targeted camp previously served as one of several notorious interrogation centers where Indian authorities detained, questioned and allegedly tortured pro-independent militants and their sympathizers.

Authorities said the nearby airport, which is run and controlled by the military, remained safe although officials suspended flights for about four hours before resuming operations around noon.

One officer, who spoke on condition of anonymity, said the attackers breached multiple layers of high security outside and inside the camp while exchanging intense gunfire with government troops.

Militant groups, along with many people in the Muslim-majority region, have also for decades been fighting for independence or a merger with Pakistan.

New Delhi regularly accuses Pakistan of arming and training militants and allowing them across the restive frontier in an attempt to launch attacks on Indian forces. Pakistan, however, strongly denies the allegation and accuses India of committing “war crimes” in Kashmir and “exporting terror” to Pakistan.