TEHRAN, October 6 - A group of British Conservative lawmakers are calling on UK Prime Minister Theresa May to quit amid growing divisions within the party over her performance. 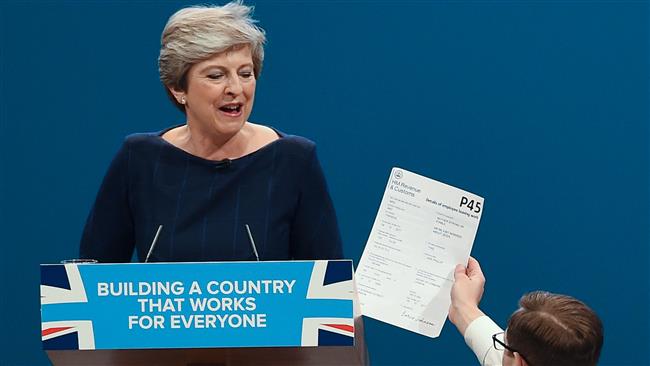 TEHRAN, Young Journalists Club (YJC) - Divisions over the future of May was made public on Friday with a former chairman of her party saying 30 Conservative members of parliament backed a plot to topple her.

Grant Shapps, who chaired the Conservative Party between 2012 and 2015, said the premier’s leadership should now be challenged.

“I think she should call a leadership election,” Shapps told BBC Radio 5 live.

He said May’s bungled election, her failure to unite the cabinet and a poor party conference are the main reasons that up to 30 Conservative lawmakers backed the bid to tell May to go.

May’s authority was already diminished by her decision to call a snap election in June that lost her party its majority in parliament just days before the opening of Brexit talks with the European Union.

To trigger a formal leadership challenge, 48 Conservative lawmakers need to write to the chairman of the party’s so-called 1922 Committee.
Many Conservative activists fear a leadership contest would exacerbate the divide in the party over Europe and pave the way for an election that some Tories worry could be won by opposition Labour Party leader Jeremy Corbyn.

The Sun, Britain’s most popular newspaper, said a bid to topple May had been brewing since her speech on Wednesday at the annual Conservative Party conference but rebel lawmakers had not yet gathered the numbers to oust her.

In one of the most bizarre British political speeches in memory, May’s address was ruined by coughing fits, a comedian handing her a bogus employment termination notice, and by letters falling off the slogans on the set behind her.