TEHRAN, October 9 - North Korea’s leader Kim Jong-un has defended Pyongyang’s nuclear program as a “powerful deterrent” against US threats, playing down the effect of the Washington-backed UN sanctions slapped on his country over its military activities. 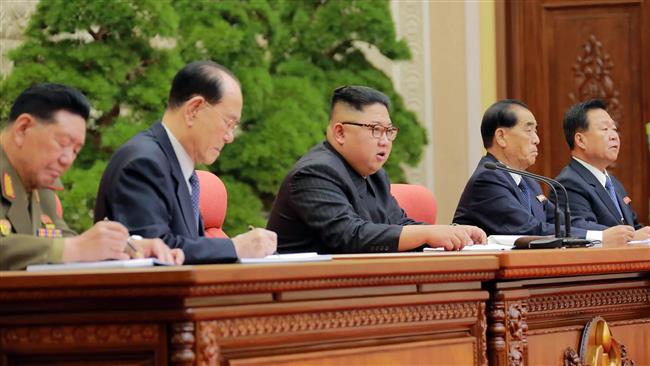 He was speaking hours after US President Donald Trump said decades of diplomatic negotiations with North Korea had failed to resolve the Korean crisis, suggesting that war was the only option against Pyongyang.

Kim also said at the meeting that North Korea’s nuclear weapons were a “powerful deterrent firmly safeguarding the peace and security in the Korean Peninsula and Northeast Asia,” making a reference to the “protracted nuclear threats of the US imperialists.”

The North Korean leader further emphasized the country’s national policy of “byungjin,” meaning the parallel development of nuclear weapons and the economy, saying the situation proves this agenda is “absolutely right.”

“The national economy has grown on their strength this year, despite the escalating sanctions,” said Kim, referring to a series of tough UN Security Council sanctions put in place to curb Pyongyang’s nuclear and missile program.

During the meeting, Kim also announced that his sister, Kim Yo Jong, was made an alternate member of the politburo - the top decision-making body over which he presides.

The 28-year-old has become a replacement for Kim Jong-un’s aunt, Kim Kyong-hui, who had been a key decision maker when former leader Kim Jong-il was alive.

The United Nations significantly ratcheted up its economic sanctions against North Korea after the country carried out its sixth and biggest nuclear test on September 3. The nuclear test raised already high tensions with the United States, South Korea and Japan.

Pyongyang, however, says it will continue and develop the military programs as a deterrent in the face of US hostility and military build-up on the Korean Peninsula. The North has repeatedly called on its neighbors to end their close military ties with Washington.