TEHRAN, October 12 - Public sector unions representing over 5 million French workers are going on a nationwide strike on Tuesday to protest President Emmanuel Macron's labor reforms. Schools, hospitals and transport will be affected, with 30 percent of flights across the country canceled. 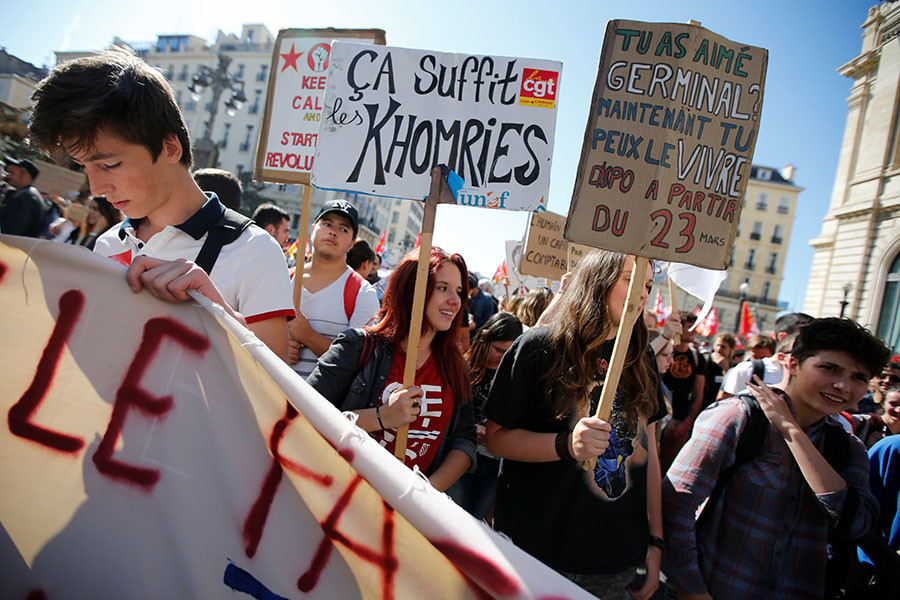 TEHRAN, Young Journalists Club (YJC) -It’s the first time in a decade that all the major unions, representing almost 20 percent of French workers, have united behind a protest call, Le Figaro reported.

“This is very simple. We are rebelling against the laws that Macron has prepared,” Didier Del Rey, spokesperson for CGT Paris Commerce, told RT. “These laws go against workers, our rights we fought for and won by workers in the 1950s. Since then the government’s done all it can to destroy what social protections there are in the labor code.

Del Rey said that the government favors businesses and “is against workers, from working conditions to salaries.”

“You should know that in the commercial sector, 70 percent of employees earn the minimum wage, which is very tough. This is what we are unhappy about,” he said.

He noted that Macron had called workers “slackers” and labelled it a provocation.

“Slackers are the people who work hard to earn a living, to feed their family, to pay their debts, their mortgages. This is purely a provocation from the head of state and from the government, meaning that slackers wake up every day to go to their enterprises to work.”

Tuesday’s strikes promise to be "powerful," trade unions say, with nearly 130 events planned to take place in 90 departments. Marches will take place in Paris, Marseilles, Lyon, Toulouse, Nantes and dozens of other cities across France.

Public sector workers have been up in arms over Macron's plans to ax some 120,000 civil service jobs, freeze pay and cut sick leave compensation.
Reforming France's strict labor laws has been one of Macron’s top priorities. In August, his government began the final round of talks with trade unions on liberalizing laws which the government hopes will reduce the 9.5 percent unemployment rate in France.

Macron, a former investment banker, wants to grant employers more power to negotiate employment conditions with workers. Many fear the measure will diminish the weight of trade unions. He also wants to cap the compensation awarded by courts in dismissal cases.

The 39-year-old president, dubbed the ‘King of slackers’ on Twitter, came under fire for branding opponents of his labor reforms as “lazy.” The French leader vowed to move the country forward at any cost.
“France is not a country which is open to reforms. France does not reform... because we rebel, we resist, we circumvent. This is what we are like,” Macron said last month in Athens. France needs a “profound transformation,” including the labor sector, Macron added, saying that his reform policy would be carried out “without brutality, calmly, with reason and sense.”

“I will be absolutely determined and I will not yield anything, either to the lazy, the cynics or the extreme. And I ask you to have the same determination, each day,” he concluded.

An Elabe online poll, which surveyed a total of 1,001 people on September 26 and 27, just four months after Macron was elected, showed that as many as 69 percent of respondents deem Macron’s policies “unfair.” Nearly six out of 10 French people believe that the president’s policy in reviving the economy “is not effective” and “will not improve the country's situation.”

Macron saw his popularity rating drop by 10 percentage points in July. The last time a newly-elected president had lost ground so quickly was in 1995 with Jacques Chirac, according to an Ifop poll.