TEHRAN, October 13 - The United States and South Korea are set to hold naval drills next week despite international calls for the de-escalation of tensions with North Korea. 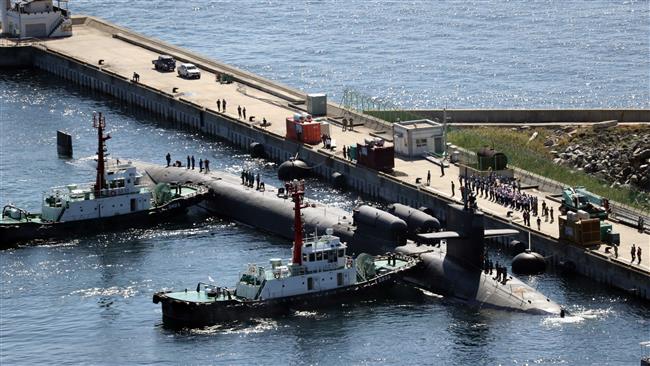 The military exercises, slated for October 16 to 26 in the Sea of Japan and the Yellow Sea, would promote “communications, interoperability, and partnership,” it said in a statement.

Joint US military exercises with forces from South Korea and Japan have been a constant cause of tensions with North Korea, which have skyrocketed in recent weeks. World leaders have called for restraint by all sides to the conflict.

North Korea sees the exercises as a rehearsal for an invasion of the country.

There has been a flurry of US military hardware movement around the Korean Peninsula in recent days.

On Friday, the nuclear-powered USS Michigan submarine arrived at South Korea’s southern port of Busan, according to Yonhap news agency, just days after another nuclear-powered submarine — the USS Tuscon — left after a five-day visit.

Earlier this week, the US flew two supersonic heavy bombers over the Korean Peninsula.
That mission came 17 days after four US F-35B stealth fighter jets and two B-1Bs flew over the peninsula.

On Tuesday Trump discussed “a range of options” with his national security team to respond to North Korea’s recent missile and nuclear tests.

On Wednesday, North Korea’s foreign minister was quoted by a Russian state news agency as saying that Trump has “lit the wick of the war” against North Korea, Presstv reported.

That statement followed Trump declaring that the US would “totally destroy” North Korea if necessary. Later still, he claimed that diplomatic efforts with North Korea had consistently failed.

North Korea has repeatedly announced that its missile and nuclear development programs were of a defensive nature. Kim on Saturday told ruling party officials that the country’s nuclear weapons were a “treasured sword,” safeguarding the country against foreign aggression.