Death toll from twin blasts in Somalia's capital rises to 85 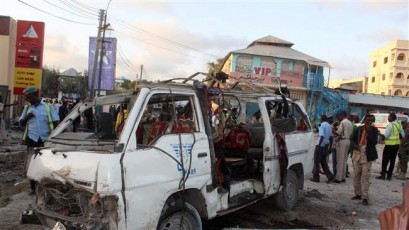 Police said on Saturday that a truck bomb exploded in a busy area outside a hotel in the K5 intersection, which is lined with government offices, restaurants, and kiosks, flattening several buildings and setting dozens of vehicles on fire.

Two hours later, another blast, also said to be from a car bomb, struck the capital’s Medina district.

“The number of the dead has risen to 85. We know some 100 who were injured,” Mohamed Hussein, a police official, told Reuters on Sunday.

Police and emergency workers were still searching the rubble of destroyed buildings on Sunday, recovering dozens of corpses, most of which had been charred beyond recognition.

Hundreds of people came to the junction in search of missing family members, and police cordoned off the area for security reasons.

An earlier police announcement had said 22 people had died in the attacks.

President Mohamed Abdullahi Farmaajo declared three days of national mourning and called for donations of blood and funds to the victims of the Saturday attacks.

No group has claimed responsibility for the attacks, so far. However, al-Shabab, a Takfiri militant group linked to al-Qaeda, is often behind such deadly terrorist attacks in the conflict-stricken country, which is located on the Horn of Africa.

The Takfiri group has in the past carried out terrorists attacks in Mogadishu and other parts of Somalia in a bid to intimidate the country’s vulnerable government and drive out African Union (AU) peacekeeping troops sent there for support.

Government forces have been battling al-Shabab militants since 2006. The militants controlled Mogadishu between 2007 and 2011. In 2011, the Takfiri militants were driven out of the capital with help from the AU troops, and a period of relative calm started in Mogadishu.

However, since last month, the group seems to have started to resume its attacks in Mogadishu.

Outside the capital and beyond specially protected zones, the militants are still a threat, reportedly roaming freely.