TEHRAN, October 18 -Palestinian factions have blasted Israel’s threat that it will not negotiate with a unity government including Hamas, with the Palestinian Authority (PA) saying such a hostile stance would not affect the nation’s resolve in pursuit of its goals. 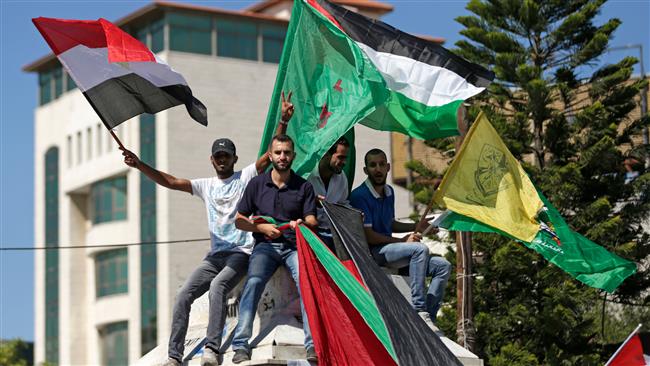 TEHRAN, Young Journalists Club (YJC) -Palestinian factions have blasted Israel’s threat that it will not negotiate with a unity government including Hamas, with the Palestinian Authority (PA) saying such a hostile stance would not affect the nation’s resolve in pursuit of its goals.

“Israeli remarks will not change the official Palestinian position to move forward with reconciliation efforts and achieve the hopes and aspirations of our people,” PA President Mahmoud Abbas’s spokesman Nabil Abu Rudeine said in a statement released by WAFA news agency on Tuesday.

Abu Rudeine further said the two sides would keep up reconciliation efforts “in order to achieve the national project, end the occupation and establish the independent Palestinian state on all the Palestinian territory occupied in 1967, with East Jerusalem (al-Quds) as its capital.”

Abbas’s Fatah Party and Hamas have been at odds ever since the latter scored a landslide victory in Palestinian parliamentary elections in 2006. Hamas governs the Gaza Strip while Fatah has set up offices in the West Bank.

Last week, however, Fatah and Hamas signed a provisional unity agreement in the Egyptian capital, Cairo, in which the latter agreed to dissolve its administrative committee in Gaza.

The fresh Hamas-Fatah reconciliation efforts have enraged Israeli Prime Minister Benjamin Netanyahu, who said that the regime would not accept “imaginary appeasement where the Palestinian side is reconciling at the expense of our existence.”

On Tuesday, Netanyahu’s office said in a statement that Tel Aviv had decided not to hold talks with a Palestinian unity government that includes Hamas unless the resistance movement meets a range of conditions.

Those conditions include a demand that Hamas recognize the Israel regime, disarm, sever its ties with Iran, return the bodies of Israelis who are claimed to be held in Gaza, and that the PA assume full security control of the coastal sliver.

Abu Rudeine further emphasized the reconciliation deal and the PA’s return to Gaza had been welcomed by the international community and this would “achieve the aspirations of our people ... ending the occupation and establishing an independent Palestinian state.”

Additionally, Hamas spokesman Hazem Qassem said that “the conditions [set] by the occupation reveals that Israel is greatly injured by the reconciliation,” noting, “This is not a new attitude for Israel.”

“The response must be to continue to strengthen the internal Palestinian front, and complete the reconciliation in every file under what was agreed in the Cairo agreement,” he added.

Hamas and Fatah had agreed on a unity government in April 2014, but it fell apart months later as the two sides failed to narrow their differences.

In the same year, the latest round of Israeli-Palestinian talks collapsed. Among the major sticking points in those discussions was Israel’s continued settlement expansion on Palestinian territories.