Is Trump going to be impeached?

TEHRAN, October 19 - US President Donald Trump will not be impeached because he is doing the bidding of the actual ruling class of the United States, according to American writer and political analyst Daniel Patrick Welch. 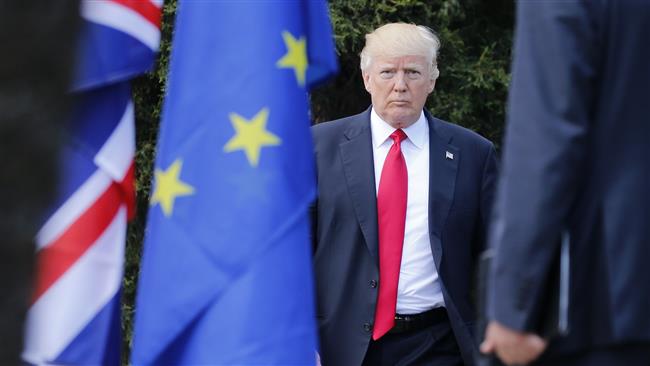 TEHRAN, Young Journalists Club (YJC) - Welch made the remarks in an exclusive interview with Press TV on Tuesday while commenting on a recent statement by the White House, which said Americans are going to be "begging" for another term of Trump.

The veteran analyst also discussed the possibility of Trump’s impeachment, the role of the Democratic Party in US political system, and pointed out the people who actually hold the power in Washington, DC.

Welch said that “this kind of rhetoric is typical Trump being a blowhard and buffoon.

Certainly Americans are not going to be begging four more years of this jackass.”

“But of course that’s not how American presidents get selected or retained. So it really is beside the point,” he stated.

“What Americans want, and what Americans are begging for has almost zero to do with who sits in the Oval Office, and it hasn’t for a very long time, if it ever did. If it were true though he would be in serious trouble if there were an alternative asking for the things that Americans really want,” he said.

“This is access to healthcare, education, food security, income and job security, you know, opposition to the strengthening police state and the national security surveillance state. But that’s not on offer from anywhere,” he explained.

“You know, certainly then the question is not are Americans going to be begging, which is clearly not the case, but who is going to stop, who is going to get in his way, and how?” he asked.

“You know it’s already true Americans are struggling and Americans are very angry. This is a basic fact of life for the vast majority of people here with incomes under $150,000 or so, which embraces the lower four full quintiles of citizens: Life is not that fun. It’s all work and no play, you know except for the distraction of sports and bread and circuses,” the analyst said.

“So there’s plenty of room, if you had an actual popular democracy. But you don’t. So opposition has to come in the form of two things: one is the ruling class. He would have to displease the people he actually works for. Or from the opposition bourgeois party. And Democrats certainly don’t embrace any of what I just mentioned,” Welch said.

“In fact the only effective, possible challenge in a popular vein was sabotaged by the Democrats in the last election. That’s the real story of the election, not this Russia crap.

And they continue to do so. This enormously popular idea of single payer health care, in California, where the Democrats have clear majorities in the legislative bodies, was sabotaged by the hierarchy of the Democrat Party,” he said.

“That’s the problem. If they have Kamala Harris or Corey Booker—this continuing drift to the right—they won’t be able to appeal to any broad-based coalition that would unseat someone like Trump. That is the actual fact—you have Dick Durbin, a Senator, saying that in order to beat Trump the Democrat Party has to move to the right. This is just crazy! You can see that they didn’t learn any lessons at all from the election. You listen to Hillary Clinton and she sounds positively unhinged with her ongoing crap about WikiLeaks and Russia on Australian television,” the commentator noted.

Possibility of Trump’s impeachment is delusion

“And if this is what they continue to do as opposed to an actual resistance—resisting the agenda of the regime in power—then they just continue. And that’s fine—it’s fine with Trump, and it’s fine with Democrats. And another thing: it’s pretty much fine for the ruling class. Unless he goes too far. That’s the other thing, which is why I mentioned it. Is he going to be impeached? Of course not. It’s delusional,” Welch said.

“People who buy into this whole Democrat-led line of crap are completely deluded in thinking this guy is going to be impeached by his own party. It has never happened, can never happen, will never happen. But they keep talking about it, and it’s over the heads of 90% of the American people, who could give a damn about the ins and outs of this Washington Inside Baseball,” he stated.

‘Iran nuclear deal itself was belligerence’

“So can he piss off the really wrong people—the people who are actually in charge? Sure. Though it doesn’t seem like he’s doing so yet. Can you be belligerent toward Iran? Of course! Clinton did it. Obama did it—the Iran deal itself was belligerence. Iran hasn’t been building a nuclear weapon, and everyone involved knows that. What Trump is risking is further isolating the US. Is that going to make the system implode in two years?” the writer asked.

“Probably not. Unless he really lunges for the nuclear button and launches a war against DPRK or against Iran, or something like that. The rope-a-dope of him going to Korea and saying we’re going to blow the place up and Rex Tillerson saying, ‘well, no, no, we’re not going to do that.’ That serves the purposes of the ruling elite just fine. There is absolutely nothing in that that is threatening to them,” he said.

“All these attacks are on the right people: against the players in the NFL, against Puerto Rico..? Are they racist? Sure. I mean he’s a buffoon and a clown. But is he dangerous to them? And the answer is not yet,” he noted.

‘Trump didn’t fall from the sky’

"And he didn’t fall from the sky. You have to remember this: he benefits from and continues this long tradition of the one-two punch, where you have an aggressive, teeth baring, racist or race-baiting, fascistic-talking leader. Like, you have Reagan, and then you have Clinton, who cleared the table and let the right wing collect their chips and restart the game,” the analyst said.

“Then you have Bush, who did the same thing, then you have this slick, suited guy like Obama come in, and then he assuages all the international feelings—fine. They went as far as they could with that train. And it worked. And obviously Trump was their favorite, but they are a pretty slick group, the ruling class, and they can work with pretty much anyone who doesn’t go against their grain,” he observed.

“This riling people up, and keeping people at each others’ throats? It’s just fine by them. You have the rightward drift and the intensification, or the militarizing and the fascistification of US society is on a nonstop track. That’s not going to change. And challenging Trump on minimal things, on personal things. Is not going to change that,” he said.

‘Democrats are the other wing of War Party’

“In fact, it serves the right purpose, for not only the ruling class but the Democrats. They’ve always done this thing of taking turns. Remember: they are the other wing of the War Party, of the Military-Industrial Complex, of the Police State, of the National Security State—the Surveillance State.. they are the Other Guys around the same round table,” Welch said.

“And what Trump is doing by ramping up the threat to workers—basically what he’s saying to the NFL is that workers have no rights—well, most Americans believe that anyway. And the democrats haven’t done much to protect workers’ rights. It’s really extending something that both parties have contributed to all along. Does it mean that it is going to continue the way it is? Who knows?” he said.

How resistance states could sink US economy

“Because this pushing everyone away, and allowing this coalition to develop between China, Russia, Iran, Venezuela, all of the kind of resistance states—that will eventually lead to the de-dollarization of the international petroleum trade and all this…that could sink the US economy, which would sink any president. But it’s not about him personally,” Welch said.

“So in that sense when he talks belligerently like this, and says ‘people are going to be begging.’ You have to look through and see—not the words he is saying, but how it exemplifies how the US system –the oligarchy…it’s not a democracy, it’s an oligarchy…people have to remember that—how that works. And if you’re looking on how it works, it makes a lot more sense than it does at first glance,” the political commentator concluded.