TEHRAN, October 24 - US Secretary of State Rex Tillerson is in Islamabad amid Washington's allegations that Pakistan is providing "safe havens" for Taliban militants. 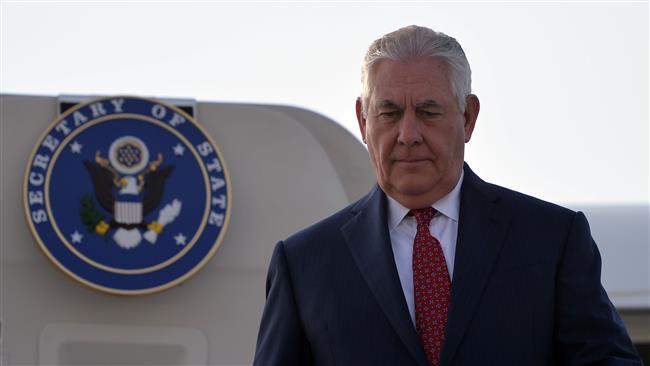 TEHRAN, Young Journalists Club (YJC) - The top US diplomat landed in the Pakistani capital on Tuesday and he is set to hold meetings with Pakistani Prime Minister Shahid Khaqan Abbasi and the military chief, General Qamar Javed Bajwa.

Tillerson received a cold welcome and was greeted only by a mid-level official from Pakistan's Foreign Office and the US ambassador at the military airport in the garrison city of Rawalpindi.

He arrived in Islamabad a day after visiting Iraq and Afghanistan.

In Afghanistan, he told reporters that Pakistan's cooperation on counterterrorism was essential for a good relationship with the US. During his brief trip to Bagram air base on Monday, Tillerson said Pakistan needed to "take a clear-eyed view of the situation that they are confronted with in terms of the number of terrorist organizations that find safe haven inside" the country.

The US secretary of state warned that Washington had made "very specific requests" of Pakistan seeking to "undermine the support that the Taliban receives."

“We can no longer be silent about Pakistan’s safe havens for terrorist organizations, the Taliban and other groups that pose a threat to the region and beyond,” Trump said in August during a major speech outlining US policy on Afghanistan.

Washington and Kabul have long accused Islamabad of supporting militant groups including the Taliban.

Successive US governments have criticized Pakistan for links with the Taliban and for harboring slain al-Qaeda leader Osama bin Laden.

The US-Pakistan relationship has waxed and waned dramatically since Trump took office in January.

Senior civilian and military officials in Islamabad have frequently said the US government is making Pakistan a scapegoat to cover Washington’s failure in Afghanistan, Presstv reported.

Pakistan and Afghanistan regularly accuse each other of sheltering their enemy insurgents. Both sides, however, deny such an allegation.

Kabul blames elements in the Pakistani spy agency Inter-Services Intelligence (ISI) for supporting Taliban militants. Islamabad blames the Afghan government for giving refuge to the militants on its side of the border. The two sides also accuse one another of not doing enough to stop militants engaging in cross-border attacks.