TEHRAN, October 26 -UK Defense Minister Michael Fallon has called on Members of Parliament (MPs) to stop criticizing the country’s arms sales to Saudi Arabia, saying such criticism “is not helpful.” 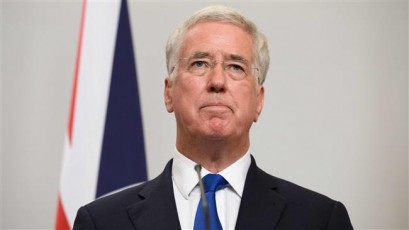 TEHRAN, Young Journalists Club (YJC) -Speaking before the House of Commons defense committee about a delayed fighter jet deal with the Riyadh regime, Fallon said Wednesday that criticism by some MPs was harming this and other major weapons sales to Saudis.

“I have to repeat, sadly, to this committee that obviously other criticism of Saudi Arabia in this parliament is not helpful and ... I’ll leave it there,” he said.

While the UK managed to sell 24 Eurofighter Typhoon jets to Qatar in September, Fallon’s trip around the same time to Jeddah in order to strike a similar deal yielded only a largely meaningless joint military agreement.

“But we need to do everything possible to encourage Saudi Arabia towards batch two. I believe they will commit to batch two,” he told the panel.

The oil-rich kingdom operates at least 72 of the warplanes, which it has been regularly using in its military aggression against Yemen.

The unprovoked war, which began in March 2015, has killed more than 12,000 Yemeni civilians, putting the impoverished country on the verge of a humanitarian crisis.

Earlier this month, Labour, the UK’s opposition party, renewed calls for a ban on all arms sales to Saudi Arabia.

Fabian Hamilton, the shadow minister for peace, said unlike the ruling Tory government, a Labour administration led by party leader Jeremy Corbyn would only provide weapons to countries that use them for defensive purposes.

British activists, who have been accusing the government of Prime Minister Theresa May of complicity in Saudi war crimes, said Fallon’s comments showed the government’s lack of respect for human rights.

“These comments from the secretary of state for defense are disgraceful. He is calling on other parliamentarians to join him in putting arms sales ahead of human rights, democracy and international humanitarian law,” said Andrew Smith, spokesperson for the Campaign Against Arms Trade.

“Fallon should be doing all he can to stop the bloodshed and end UK complicity in the suffering, not urging his colleagues to willingly ignore the abuses in order to sell even more weapons,” he added.

The UK has been frantically searching for new weapons buyers around the world to limit the effects of leaving the European Union (EU).

The push for more sales has on several occasions led to the government’s breach of its own rules about avoiding business with repressive regimes that violate their citizens’ rights.

The UK has sold more than £6 billion from their deals with Saudi Arabia ever since the beginning of the Yemen war.