TEHRAN, October 27 -The corpses of 37 unidentified people with purported signs of torture and gunshots have been discovered near the eastern Libyan city of Benghazi, security sources say. 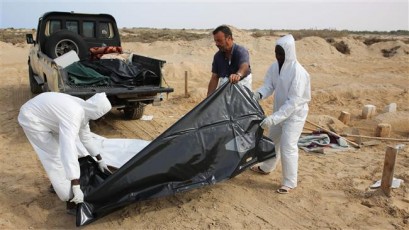 TEHRAN, Young Journalists Club (YJC) -The corpses of 37 unidentified people with purported signs of torture and gunshots have been discovered near the eastern Libyan city of Benghazi, security sources say.

The sources, speaking on condition of anonymity, said on Friday that the bodies had been found in Kassarat Road near Abyar town, some 70 kilometers east of Benghazi, on Thursday night.

They added that the bodies bore signs of torture and gunshots either in the head or chest.

The corpses were reportedly taken on trucks to the morgue of Benghazi Medical Center for forensic analysis.

In recent months, smaller numbers of bodies have been found in and around Benghazi, which is under the control of the Libyan National Army (LNA), led by military strongman Field Marshal Khalifa Haftar.

Libya has faced crisis since a US-led military intervention resulted in the downfall of long-time dictator Muammar Gaddafi in 2011. The country has been grappling with chaos and the emergence of numerous militant groups, including the Daesh Takfiri terrorist outfit.

In addition to the LNA, which is centered in the far eastern city of Tobruk, the country is ruled by another government -- the Tripoli-based Government of National Accord (GNA) led by Fayez al-Sarraj.